It’s no surprise that mobile gaming in India has really taken off over the past few years. The reason for the same could be down to improved quality of games, better performance of affordable phones, low-cost data or probably a combination of the lot. However, the question now would be which city would offer the best gaming experience in India. Thankfully, a report by Opensignal seems to have answered that query with its newest report.

Opensignal’s report analyzed the mobile network experience in 48 of India’s largest cities. It then checked that against its Games Experience metric which measures how users perceive real-time multiplayer gaming on a cellular network on a scale of 0-100. The measurements were conducted across popular battle royale and MOBA games like Call of Duty: Mobile, Clash of Clans, and even PUBG Mobile which was banned a few months ago. 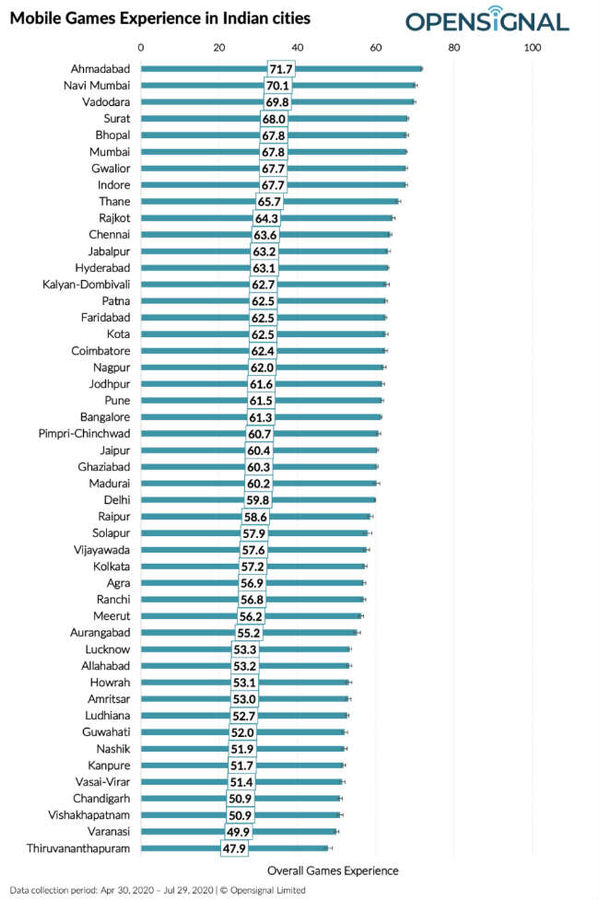 One of the more interesting results of the report was that the major metropolitan cities in India like Delhi, Mumbai, Kolkata, Chennai or Bangalore were not in the top 5. In fact, Mumbai was the only metro to get into the top 10. Ahmedabad took the top spot with a score of 71.7, followed by Navi Mumbai with a score of 70.1. Vadodara rounded off the top three spots with a score of 69.8. The report also notes that cities in Gujarat and Maharashtra dominated its mobile gaming experience in India with seven of the top ten cities in India. It was noted that only four of the eight Tier 1 cities in India were within the top 20. In fact, Tier 2 cities like Surat, Thane and Rajkot managed to get into the top 10. Tier 1 cities like Pune, Bangalore, Delhi and Kolkata were placed in the lower half. Varanasi and Thiruvananthapuram were at the bottom of the list with scores under 50.