Redmi General Manager Lu Weibing has confirmed the launch of the Redmi K40 series in February along with revealing some information about the upcoming smartphones. Weibing has also confirmed that the Snapdragon 888-powered Redmi K40 Pro will start at CNY 2,999 which also makes it one of the most affordable phones to be powered by Qualcomm’s flagship processor. 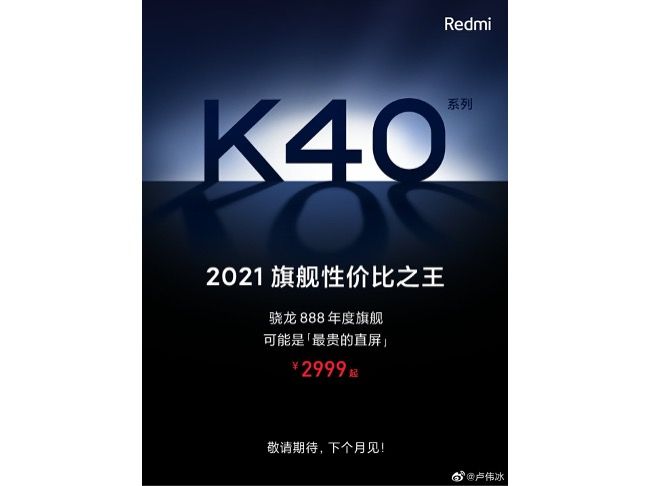 Some other features confirmed include a flat-screen AMOLED display and 4,000mAh+ battery capacity. Weibing claims that the Redmi K40 series will offer the “ultimate price-performance ratio” and aims to be the “best direct screen” flagship phone. The Pro variant in the series may feature an AMOLED screen while the standard option will feature an LCD screen.

According to a recent leak, the Redmi K40 series could use a 120Hz high-refresh-rate AMOLED display, however, the rest of the specifications about the phones have not been revealed yet. We will get to know more about the upcoming smartphones as we near the launch date in February.

Xiaomi recently launched the Mi 11 featuring a 6.81-inch QHD+ (3200×1400 pixels) resolution display that uses an AMOLED panel with support for 120Hz refresh rate. The screen is also topped with a layer of Gorilla Glass Victus for added protection.

The Mi 11 has a triple camera setup on the back that consists of a primary 108MP camera with an f/1.85 aperture, a 13MP ultra-wide-angle camera with 123-degree field-of-view and a 5MP macro camera. On the front, there is a 20MP selfie camera housed within the punch-hole cutout.

The Mi 11 is equipped with a 4,600mAh battery with 55W fast charging support and 50W fast wireless chagrin support. It is priced starting at CNY 3,999 for the base variant with 8GB RAM and 128GB storage in China.