In its first season, Four More Shots Please! — Amazon’s first original scripted Indian comedy series from first-time creator Rangita Pritish Nandy — was just a pretty shell. That’s how we summarised it in our review, having noted its many faults in the writing and technical departments, be it the pre-adult mentality that defined its approach, its limited success with the empowering ideas it chose to tackle, or the overall lack of nuance, especially in direction and editing. Several other critics were of the same opinion. Amazon’s decision to renew the show for a second season — out now on Prime Video — was baffling, not least because it seemed content to give free rein to those already at the helm. For better or worse, Four More Shots Please! season 2 is largely made by the same team.

There’s a new co-showrunner in Rangita’s sister, Ishita Pritish Nandy, upgraded from her previous associate showrunner position. This is Ishita’s first credit as showrunner; she has previously handled brand and movie promotions. Season 2 also has a new director, Nupur Asthana (Bewakoofiyaan), but the scripts and dialogues continue to be from the duo of Devika Bhagat and Ishita Moitra. Between them, Four More Shots Please! is still the same show it was upon its debut last year. If anything, the Amazon series has further dialled up some of its worst instincts. Thanks to a near-constant use of background songs and an obsession with montages, Four More Shots Please! season 2 feels more akin to a series of music videos.

In turn, that signals an incapability of stringing together a few dialogue-filled scenes, let alone building up to something. Too often, the lead quartet offer empty aphorisms in lieu of real, honest, engaging conversations, before ending the scene with a group hug. Most plot ideas — the ones that are not abandoned — are resolved 10 minutes after being first introduced, sometimes while juggling another character’s arc. This love for quick fixes undermines virtually every narrative thread. Since Four More Shots Please! season 2 is always rushing through setups at lightning speed, unwilling to sit and spend time with the characters’ mindsets, its lows and highs don’t seem real at the end of the day. If you can’t feel the emotion, it’s going to feel unearned.

We pick up four months on from the events of Four More Shots Please! season 1 finale, with the broken-hearted Siddhi Patel (Maanvi Gagroo) having spent two of those on a parents-funded Euro trip by herself. In Istanbul, she has a major breakdown and rings up best-friend and fitness trainer Umang Singh (Bani J), who in turn calls up the two other members of the girl-gang: investigative journalist Damini Rizvi Roy (Sayani Gupta) and lawyer Anjana Menon (Kirti Kulhari). But the four haven’t spoken since that “big fight” at the end of season 1. Except that this is an easy, frothy comedy, which is why the three pack their bags in a minute and are on the next flight to the Turkish capital, where they patch up after a few scenes, several costume changes, and a dozen selfies.

During those exchanges, Four More Shots Please! season 2 fills in the blanks. Despite the hysterics, Anjana has custody of her daughter, because her ex-husband Varun Khanna (Neil Bhoopalam) didn’t press charges. Back home, she shies away from the prospect of domestic bliss with her boyfriend, which is further complicated by the arrival of rival lawyer Shashank Bose (Samir Kochhar, from Sacred Games) and Varun looking at their past with rose-tinted glasses. There’s a larger point here about Varun’s self-destructive personality — his second wife Kavya Arora (Amrita Puri) is pregnant — but the subplot is forgotten and never resolved. Simultaneously, Anjana is dealing with misogyny at work, but Four More Shots Please! season 2 is too on the nose and self-righteous in its depiction.

Having broken the bar owner Jeh Wadia’s (Prateik Babbar) heart at the end of season 1, Damini is back to the land of casual sex with her gynaecologist Dr. Aamir Warsi (Milind Soman). On the career front, she has spent the four intervening months researching a judge’s alleged murder for a book (which is written in a tiny montage after two episodes of writers’ block). Through it, Four More Shots Please! season 2 goes head-on with the socio-political issues of press self-censorship and demonisation of journalists in India today, with Damini being labelled an “anti-national” and “presstitute”. But the Amazon series bungles its handling of the storyline as it ends up giving the other side ammunition, and ultimately, it reveals it doesn’t have anything valuable to say. 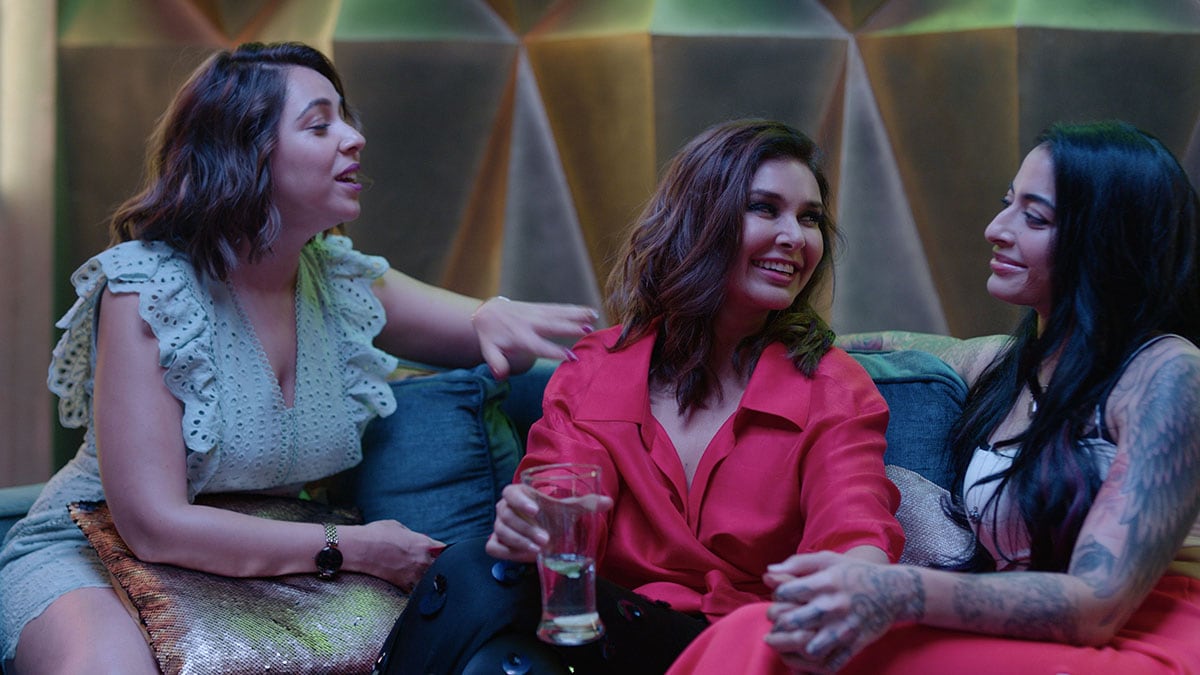 This is also the case with Umang’s arc, which involves her trying to help her girlfriend Samara Kapoor (Lisa Ray), who we’re told is bipolar. We’d little faith Four More Shots Please! would commit to exploring it, and that’s exactly what happens. That leaves Siddhi, whose new thing on season 2 is stand-up comedy. Having tried her hand at half a dozen careers, the trust-fund Gujarati girl accidentally discovers a talent for zingers after heckling another comic during his act. If there’s a single theme on the sophomore run of Four More Shots Please!, it’s that women need to embrace independence. That applies both personally and professionally for the four lead characters, as they deal with self-esteem, identity, desire, and motherhood.

But any real progress on that front is undercut by Four More Shots Please!’s aforementioned shortcomings. Kulhari is largely the only one who’s able to lift the lacklustre material, thanks to her line delivery and the tiny touches she deploys with her face. Except that’s not nearly enough, when you are battling poor direction that keeps pushing high notes out of actors, have little cinematographic idea of what frame to pick and which ones to switch between, or allow your characters to repeatedly make improbable decisions. And even when its characters have something sensible to say, Four More Shots Please! season 2 can’t commit to it. Too afraid of depicting something raw, the Amazon series is happy to jump from one cutesy, cheesy, and clichéd moment to another.

Luca Review: Pixar Movie Is an Ode to Friendship — and Vespas