Xiaomi has made its name in India with affordable smartphones, and more recently, smart TVs. The company’s success in each of these segments has been nothing short of spectacular. Each new launch gets a phenomenal amount of attention, and that’s a direct reflection of how disruptive its prices are. We’re hoping to see similar upheaval in the laptop market, with Xiaomi finally bringing its first models to India after much anticipation. If the Mi Notebook and Mi Notebook Horizon Edition take off, they could make life quite difficult for Dell, HP, Acer and Lenovo. We’re going to take our first look at the Mi Notebook 14 Horizon Edition, which is the most premium model of today’s launches.

Xiaomi told Gadgets 360 that it doesn’t intend to flood the market with multiple models and variants, citing widespread confusion and duplication in stores right now. The Mi Notebook and Mi Notebook Horizon Edition product lines are suitably differentiated, and prices are staggered sensibly.

The Mi Notebook 14 Horizon Edition will be available with either an Intel Core i5 or Core i7 processor. The two options are priced at Rs. 54,999 and Rs. 59,999 respectively in India. The more affordable Mi Notebook 14 starts at Rs. 41,999, and you can read all about the differences between these models and variants in our launch event coverage.

The body of the Mi Notebook 14 Horizon Edition is made of an alloy of aluminium and magnesium. One interesting design touch is that there’s no logo on the lid – it’s completely blank. Xiaomi has gone with a matte sandblasted texture, but even so this is downright minimalist compared to everything else we’ve seen from the company. The metal looks dark silver but takes on a warm tinge when seen under sunlight. We like this look, and we suspect that some people will be happy not to have Xiaomi or Mi branding on an expensive laptop.

Xiaomi emphasises that the lid of the Mi Notebook 14 Horizon Edition can be lifted with just one finger, and that the bottom won’t raise itself or slide around on a table. We found this to be true, and it does make this laptop easier to use. The hinge still feels solid and there’s minimal flex to the lid even with pressure applied deliberately. The only Mi logo you’ll see is right below the screen.

One of the key design elements of the Mi Notebook 14 Horizon Edition is the slim 3mm borders to the sides and top of the screen. Many manufacturers have gone down this route on their premium models. The screen also stands out because it does not have a glossy coating, which is something we really appreciate. This will help reduce reflections and glare, especially with indoor lighting. 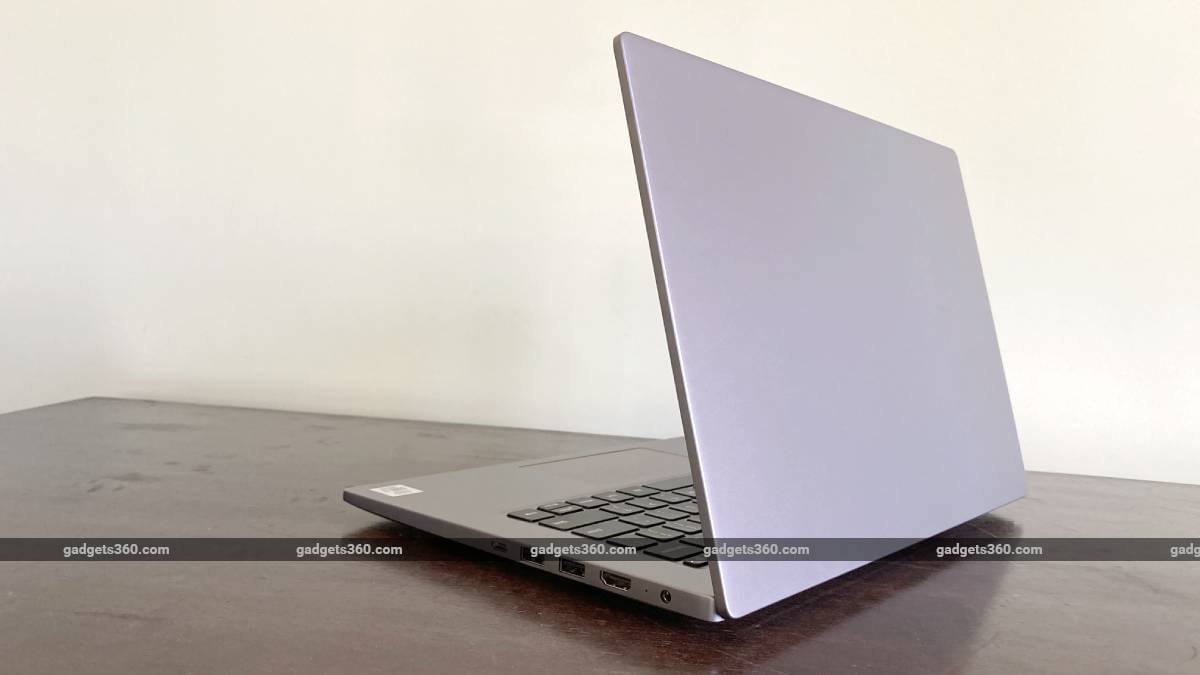 While other manufacturers have managed to integrate webcams into such slim borders, Xiaomi decided to drop the feature entirely. The company told Gadgets 360 that at the time of development, its research showed that people didn’t really care about webcams. However, the recent explosion of video conferencing for remote work, education and communication has changed this, and so a USB webcam will be included with each laptop. This is a fairly light unit that just sits on the top lip of the lid with no need for any sort of clip or clamp.

Those slim borders also contribute to the Mi Notebook 14 Horizon Edition’s relatively compact dimensions. As many other manufacturers claim, you get a 14-inch screen in a body the size of most 13.3-inch laptops. The body is 17.15mm thin and weighs 1.35kg which is well within Ultrabook territory. We wouldn’t have much trouble carrying this laptop around with us every day.

We have a full-HD 1920×1080-pixel screen which appears to be sharp and bright. In our initial impressions, viewing angles and colour reproduction seem fine. There are bottom-firing 2W stereo speakers at the edges of the base.

The keyboard keys appear to be well spaced, although the arrow cluster is unfortunately compressed. Xiaomi says its scissor key action and 1.3mm travel make this keyboard very comfortable, and we’ll see for ourselves in our full review. A keyboard backlight would have been very welcome, but this model doesn’t have that feature. 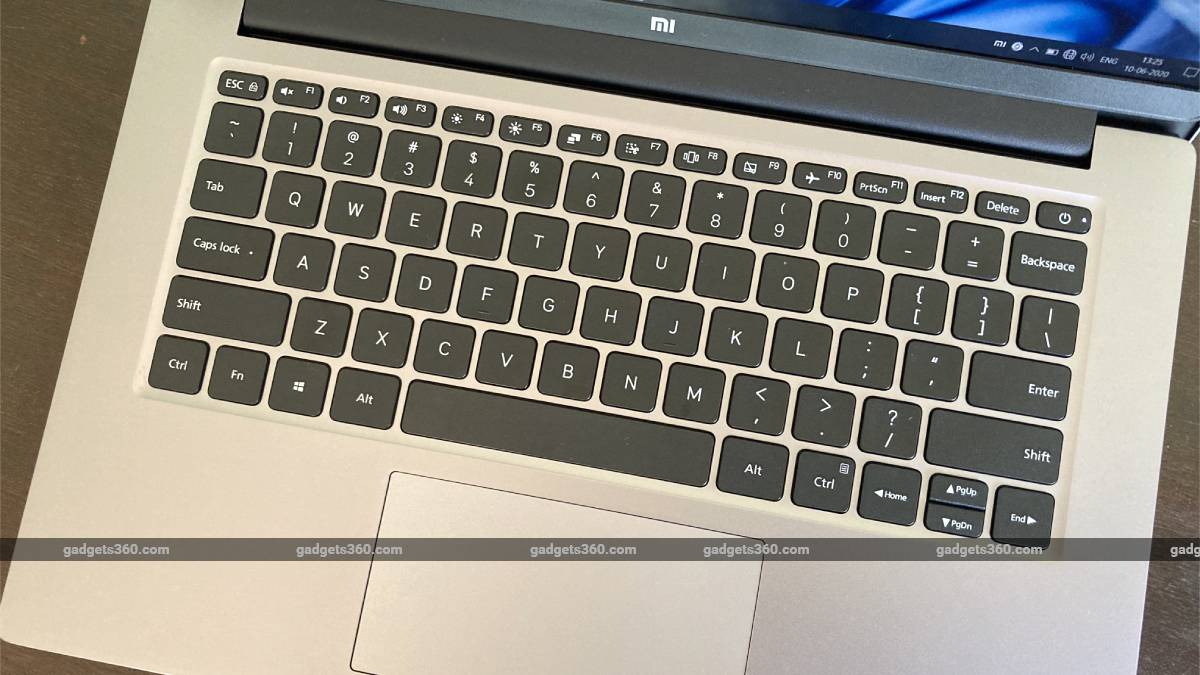 The keyboard and trackpad appear to be large and well spaced

For the variant we have with us, Xiaomi has gone with the 10th Gen Intel Core i7-10510U processor, and interestingly there’s a discrete Nvidia GeForce MX350 GPU. The company proudly claims that this GPU delivers gaming-grade performance, but it is a very entry-level, bare-basic model, so don’t raise your hopes too high if you’re looking for a disruptively priced gaming laptop. The Horizon Edition models get a 512GB NVMe SSD while the lower models have SATA SSDs. There’s also 8GB of RAM which is unfortunately soldered and not upgradeable.

Battery life is said to be 10 hours thanks to the 46Wh battery. There’s also Wi-Fi 802.11ac, Bluetooth 5, and DTS audio enhancement. You get two USB 3.1 (Gen1) ports Type-A ports and one Type-C port, one USB 2.0 port, HDMI 1.4b, and a 3.5mm audio socket. Charging is not supported through the Type-C port; you’ll have to use the traditional charger.

Xiaomi clearly knows it has a reputation when it comes to bloatware and spam, because it was quick to assure us that there’s none of that with Windows 10 on the Mi Notebook 14 Horizon Edition. You do get two preloaded utilities: Blaze Unlock lets the laptop recognise a compatible Mi Band and unlock itself when you walk up to it, and Smart Share lets you send files between devices, much like Apple’s AirDrop.

There’s a lot to like about the Mi Notebook 14 Horizon Edition. It’s compact, sturdy, and good-looking, but more importantly, the price seems reasonable. The list of specifications looks promising, and we’ll tell you all about how it performs in the real world once we put it through our full review process. Do stay tuned to Gadgets 360.