Oppo has delivered yet another slim and light smartphone, the F17 Pro. However, unlike the Reno 4 Pro (Review), this model has a more affordable price tag of Rs. 22,990. The sub-Rs. 25,000 segment isn’t currently saturated with a million different offerings, which could give the F17 Pro a chance to try and make a name for itself here.

If you’ve read my first impressions of the Oppo F17 Pro, then you know that the slim design and lightness are two of my favourite attributes so far. But what about the rest? Even though there isn’t too much competition, there are some heavy-hitters such as the Redmi K20 (Review), and the more recent Realme 7 Pro (Review), both of which directly compete with the F17 Pro. It’s time to see if you should be putting your money on Oppo or saving it for the competition.

I wouldn’t be surprised if a lot of people buy the Oppo F17 Pro solely for its design. It measures 7.48mm in thickness and weighs just 164g, which makes it incredibly comfortable to use for long periods, be it gaming or texting. The frame and the back panel are built from plastic. It looks delicate at first, but this phone still feels quite rugged. The Magic Blue colour that I have looks great under sunlight, and you can see hints of purple along the edges. This split design seems to be a popular trend, as even Realme’s new 7-series sports it.

There isn’t much of a protrusion for the rear cameras, and the design of the lenses is similar to what we saw on the Oppo Reno 4 Pro. You get a USB Type-C port, a headphone socket, and a speaker. There’s a triple-slot tray on the left, which can accept two Nano-SIMs and a microSD card. The Oppo F17 Pro has a stylish design on the back

In the front, the Oppo F17 Pro has a 6.43-inch Super AMOLED display with a full-HD+ resolution and a maximum brightness of 800nits. Sadly, this is only a 60Hz panel and not 90Hz or 120Hz. There’s no HDR certification either, which is a little disappointing. However, thanks to the AMOLED panel, you can make use of the always-on display feature to check the time and alerts. You also do get an in-display fingerprint sensor. The latter worked well in my experience, and so did face recognition.

Performance was been pretty good in my experience. With daily usage, the Oppo F17 Pro felt  snappy and responsive when loading apps or simply navigating through Android’s menu system. The Android skin used is ColorOS 7.2, just like we saw on the Reno 4 Pro. Smart Sidebar, Quick Return Bubble, themes, and custom apps such as Oppo Relax are all present. The F17 Pro does get one new gesture called ‘Air answer,’ which lets you answer or reject a call by performing a hand gesture in front of the selfie cameras. It works decently well and could be handy if you need to answer a call without touching the phone.

The Oppo F17 Pro uses the MediaTek Helio P95 SoC and comes in just one configuration, which is 8GB of LPDDR4X RAM and 128GB of UFS 2.1 storage. The octa-core SoC is fairly speedy but not as powerful as, say, the Qualcomm Snapdragon 720G or Snapdragon 730, according to benchmarks anyway. AnTuTu returned a score of 2,03,472 points, while the T-Rex graphics test in GFXBench returned around 45fps. These aren’t bad numbers but they still trail what Qualcomm’s equivalent chips can put out. 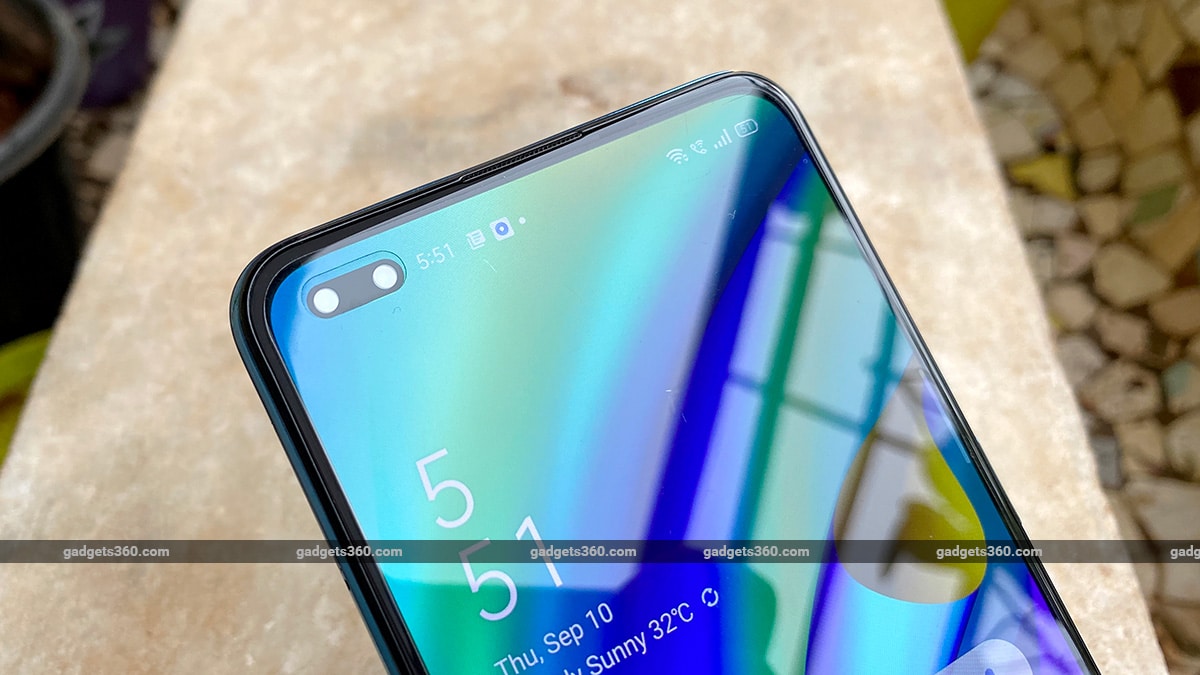 Despite this, gaming performance was pretty decent. Games such as Oddmar, Pixel Gun 3D and Battle Prime all ran smoothly. The in-game graphics looked good, and gameplay was smooth. Overheating wasn’t an issue either, as other than the back of the phone getting slightly warm, it was very comfortable to hold even with extended gaming sessions.

Watching videos on the display was a good experience as colours were punchy and the brightness was more than adequate. There was a mild blue tinting issue when viewing white backgrounds slightly off axis, but I didn’t find this to be a major hindrance. The speaker on the bottom got fairly loud but the ability to use the earpiece as a second speaker for stereo would have been better.

The 4,015mAh battery lasted for a day and half of medium to light usage, on average. It also performed decently in our HD video loop test, lasting for 16 hours and 48 minutes. The battery charges quickly thanks to 30W fast charging. In my experience, I was able to charge it fully in under an hour. The Oppo F17 Pro does not have a macro camera and there’s no macro mode in the camera app either. I wouldn’t say this is a total loss, since most dedicated macro cameras on phones I’ve tested haven’t exactly been great. In this case though, it would have been better to have one rather than the dedicated low-res monochrome camera, in my opinion. This only seems to be used if you select the ‘OP7′ filter in Portrait mode, and nowhere else. 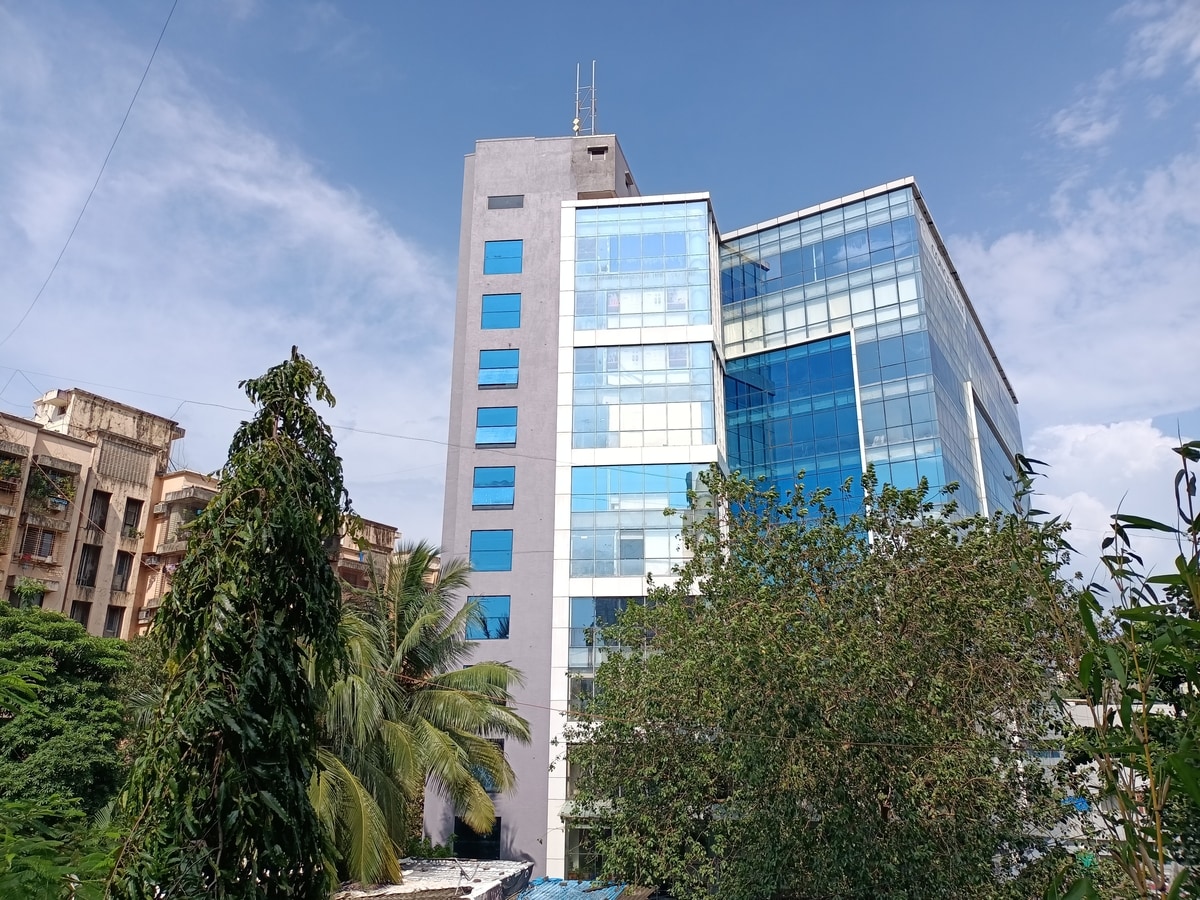 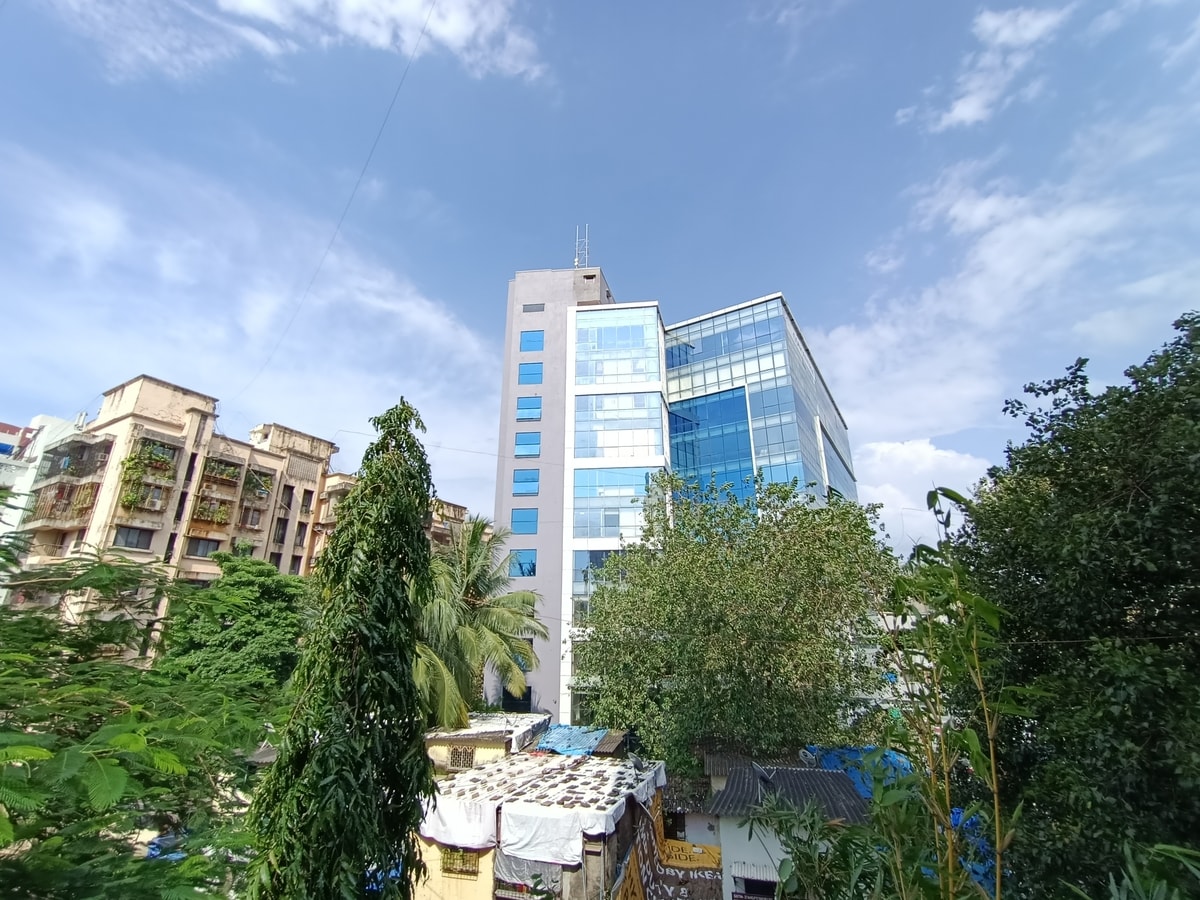 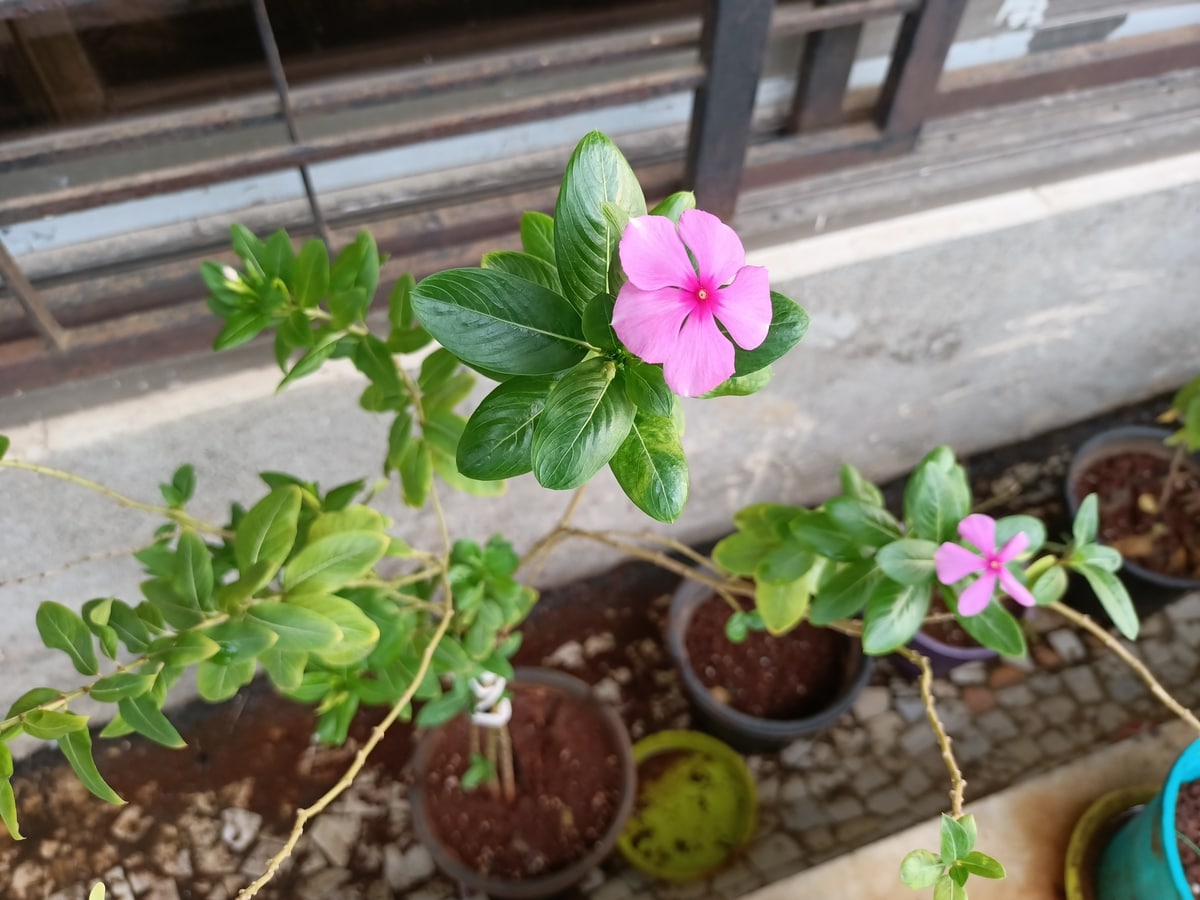 In daylight, the primary Samsung GM1 sensor captures sharp and well-detailed 12-megapixel binned images. Exposure and colours were also handled very well, without any unwanted boost in saturation. Autofocus was reliable, which made capturing close-ups quite easy. I did find myself having to tap the screen to force the phone to correctly expose a subject at times, but this wasn’t too often. The ultra wide-angle camera captured shots with equally good exposures, even though details were a bit soft.

Portrait mode worked well, correctly blurring out the correct areas behind me in most instances. The level of background blur can be adjusted before taking a shot. 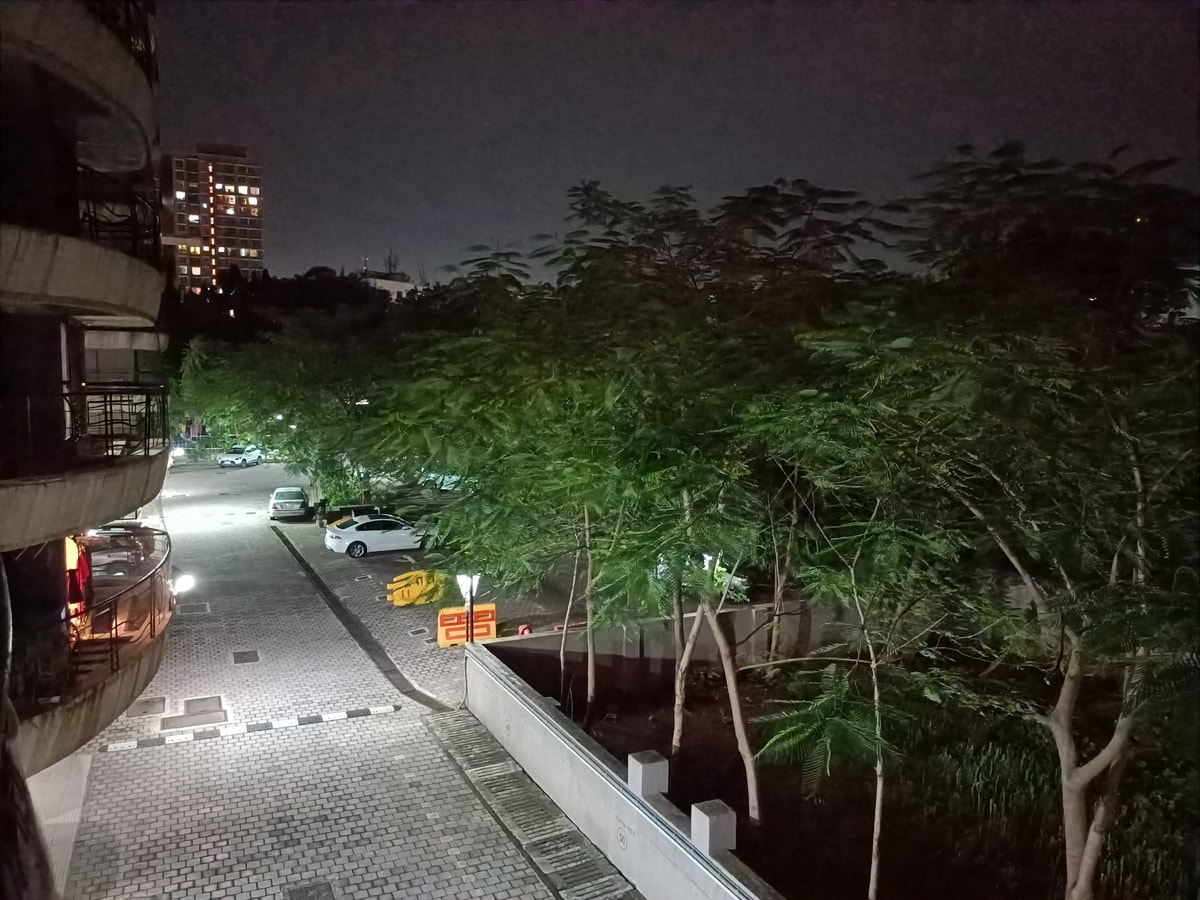 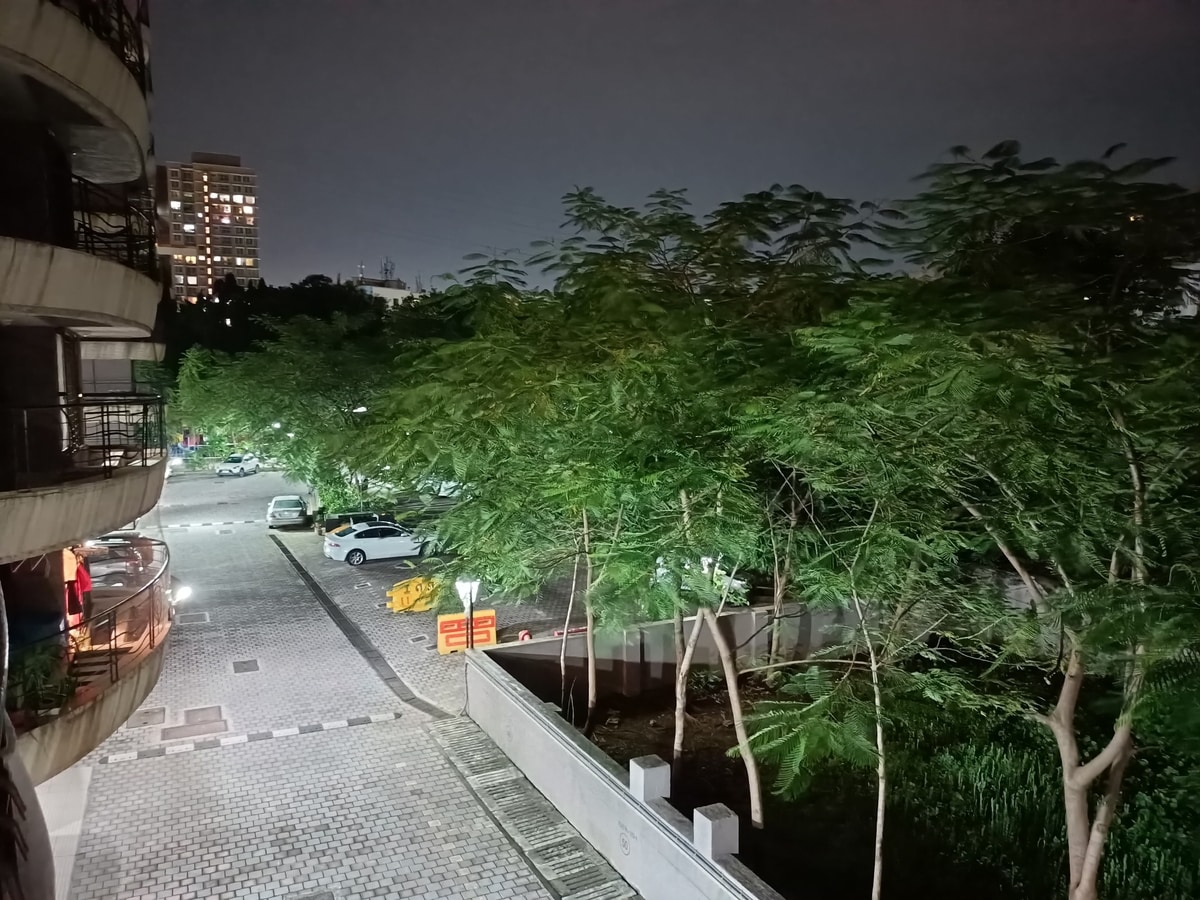 Low-light images were not bad but details were visibly weaker once I magnified them. Dark patches like the sky also had a bit of grain. Night mode helps fix the noise and exposure, but detail doesn’t improve too much. However, I did have better luck with close-ups, which displayed slightly better details with Night mode compared to without it.

The main front camera captured decent-looking selfies under good light. Facial details were good and skin tones generally looked natural. Portrait mode for selfies doesn’t deliver the most pleasing results but it’s there if you need to use it. Selfies don’t look great in low light but you can get usable shots if there’s enough artificial light around you. 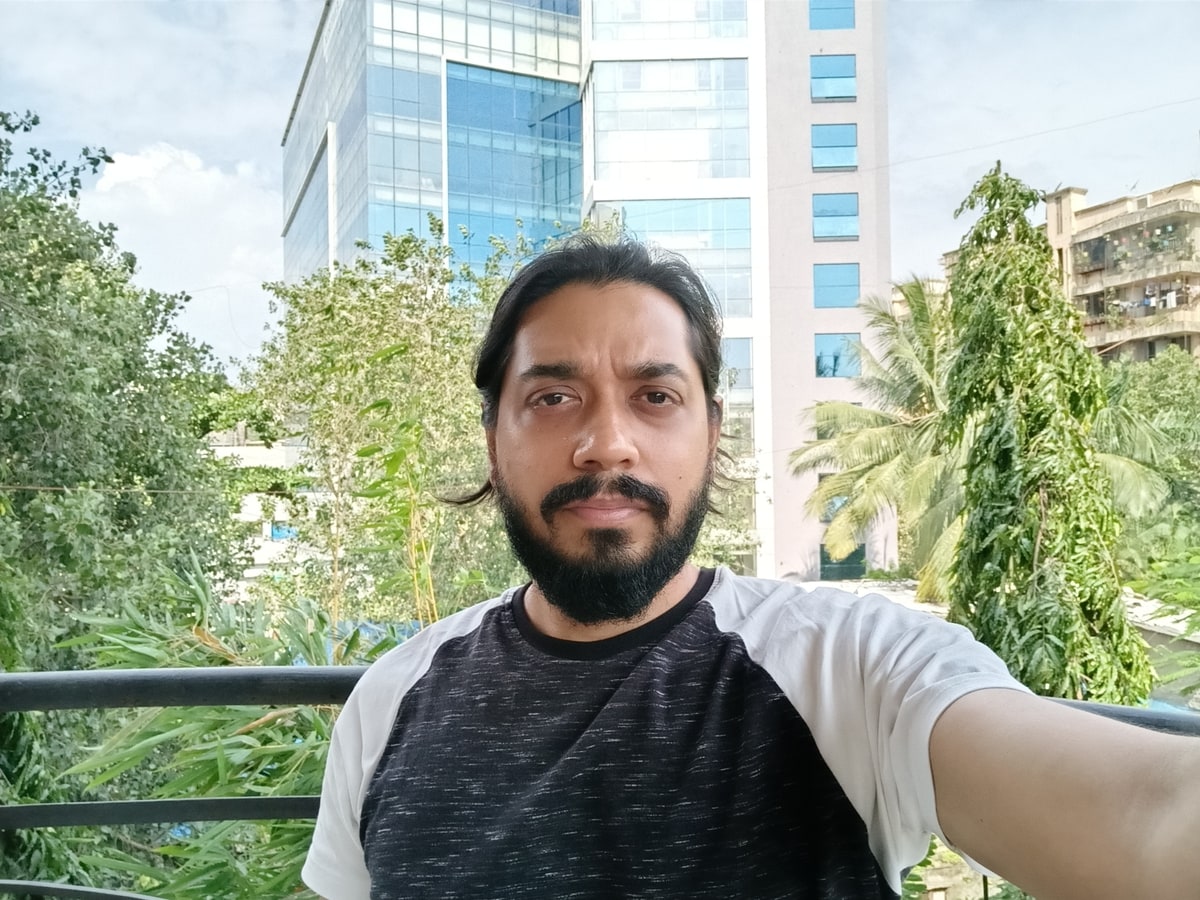 You can shoot videos at up to 4K on the Oppo F17 Pro, but sadly, without stabilisation. I also found colours to be quite off when shooting at this resolution. Videos are stabilised at 1080p, but the quality is a bit weaker. You can shoot video using the ultra wide-angle camera too, but only at 1080p, and you need to switch cameras before you begin shooting. The quality is below average and there’s no stabilisation. Image quality in low light is not great either, even if you’re using the primary camera.

Verdict: Should you buy the Oppo F17 Pro?

The Oppo F17 Pro is a very likeable phone, mostly because of how slim and light it is. It looks quite modern thanks to the exposed-lens design of the rear cameras. Battery life is also very good, it charges quickly, and it has a nice display.

However, I do think the camera performance could have been much better, and despite having six of them, only a few are really noteworthy. Then there’s performance, which, while decent in its own right, does feel a little weak compared to phones such as the Realme 7 Pro (Review) and Redmi K20 (Review), which are also available at similar prices.

Is Android One holding back Nokia smartphones in India? We discussed this on Orbital, our weekly technology podcast, which you can subscribe to via Apple Podcasts, Google Podcasts, or RSS, download the episode, or just hit the play button below.