Raji: An Ancient Epic is an unusual thing — a console-quality game made in India, centred on Indian culture, and developed by an Indian studio taking the lead. Pune-based Nodding Heads Games makes their debut with Raji, a hack-and-slash platforming adventure inspired by Indian mythology, which follows the titular teenager as she battles an array of demons across a series of otherworldly environments with the help of Hindu goddesses and gods such as Durga and Vishnu.

It’s been in the works for quite a while — we spoke to game designer Avichal Singh in late 2017 when it went up on Kickstarter, and it was supposed to be release in mid-2019 — but it’s finally available on the Nintendo Switch as a timed exclusive, and coming soon to PC, PS4, and Xbox One.

The big charm of Raji is its unique visual, aural, and scripted landscape, owing to its Indian roots and thanks in part to the fact that it’s rarely depicted on screen in the video game arena. We especially loved Raji‘s background score and sound design, which incorporates local folk instruments such as the sitar (necked bowl lute), tabla (twin hand drums), bansuri (side-blown flute), ravanahatha (bowed stringed violin) — and ornaments in Raji’s payals (anklets).

Add to that the stories of Hindu mythology that are weaved into Raji, either as part of the game’s central narrative or depicted as murals, which are explained by way of reflecting on memories by Raji‘s narrators, the Goddess of War Durga and the God of Preservation Vishnu, and there’s a lot of intricate detail to take in. In doing so, Raji becomes a gateway to introduce Indian mythos to newer generations and audiences.

But in making it accessible, Raji loses out on some of its authenticity. The game is largely in English with small parts in Hindi. There are no Indian language options for the subtitles either, even though Raji offers the likes of Spanish, French, Korean, Russian, and Mandarin. But that’s understandable from a business perspective. The (non-mobile) gaming market is much stronger outside India, which is why it makes sense that Raji is aimed at the international audience.

And given the prevalence of English in India and the premium crowd that it’s targeting — it’s limited to the Switch for now, a console that isn’t officially sold here, and the fact that the game costs $25 (about Rs. 1,900) — Raji can easily get by with just English. Its bigger problem is a lack of polish in certain departments, but Raji is still a strong effort.

Raji begins by introducing two orphaned kids, the circus performer Raji (voiced by Alka Sharma) and her younger storyteller brother Golu (also Sharma), on the day of Raksha Bandhan, a festive holiday that celebrates the sibling bond in which brothers promise to protect their sisters. But in a feminist spin on proceedings, it’s the elder Raji who must come to her brother’s rescue after he is captured by the very demons whose tale he tells for a living. The opening cut-scene — and those that follow — deploy shadow puppets to depict the various characters, which in turn also poetically emphasises Raji‘s connections to Indian folk art.

That cultural link is also seen in Raji’s mini-puzzles that are inspired by mandalas — geometric artwork that has been part of Hinduism and other religions across the world — and help develop the brother-sister relationship that gets only a couple of minutes in the beginning. Other puzzles require you to pay attention to the environment, rather than the puzzle itself. As a game mechanic, these elements serve as a much-needed break between bouts of combat.

Speaking of combat, Raji has you fighting a variety of monsters whose designs also draw off Indian mythos. There are huge, hulking beasts with a giant club as weapon. There are fast-moving money-like creatures that want to bite your head off. Others launch bile-filled projectiles, have the ability to fly, or are shaped like a chakra with an eye in the middle.

The enemies you face as Raji change as you traverse new worlds, though some carry over across worlds. As Raji chases the demons to free Golu, you begin in a temple to Durga (Sharma) that feels inspired by royal Rajasthani architecture. The second world — “Hiranya Nagari” — is meant to be dedicated to Vishnu (Sourin Chaudhari) himself and revolves around lotuses and water. While the Durga world is tinged by fire, consists of misshapen rocks, and feels inhospitable, Hiranya Nagari is elegant, beautiful, and serene thanks to its cool colour palette and design aesthetic.

As you progress into newer worlds with Raji, you’ll also unlock new elemental powers and weapons gifted by the gods. You start off with a Trishul and lightning abilities thanks to Durga, with Vishnu later granting fire and a ranged weapon.

Raji’s weapons and powers can be upgraded too. There’s no open world exploration on Raji, but you should explore all areas. Many a time, Raji will leave you at a T-junction. One of the paths will push the game forward, while the other will be at a dead-end. But it’s the latter that will usually give you access to coloured orbs that restore your health, increase your favour with the gods, or can be used for the aforementioned upgrades.

Durga offers you chain lightning, electrocution, and electric bolts, while Vishnu allows you to inflict burn damage, link a fireball, or drop a meteor on the battlefield. You can increase the possibility of these attacks by assigning orbs. But they aren’t permanently spent and can be reassigned at any time. 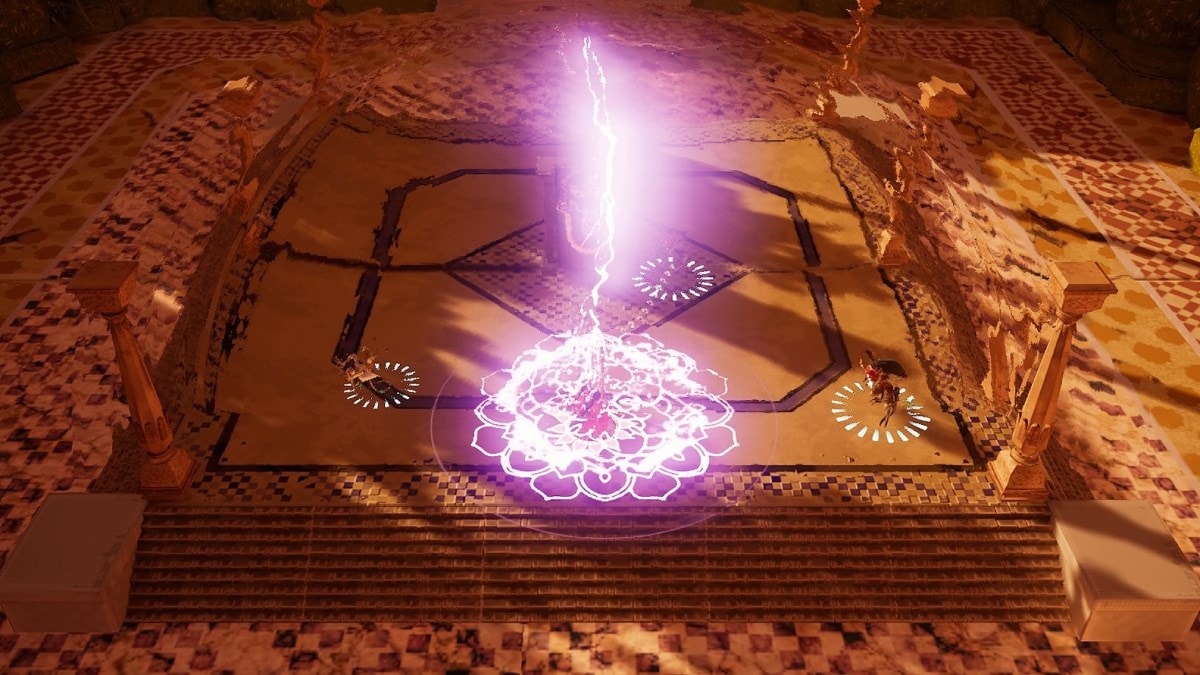 While the god-gifted weapons and powers form her attack, Raji adds to that with her excellent acrobatic movement abilities, courtesy of the time spent in the circus. It quietly justifies how she’s able to leap past chasms, cling to and swing around poles, and run up walls. The game offers a little tutorial of the mechanics whenever it’s first needed, showing you how you can combine movement and attack to create several combos, be it back-flipping off walls like in The Matrix or causing area damage with your Trishul somewhat like Aquaman.

Raji’s flexibility even shows up in attack when you’re not explicitly using it. Smash the same attack button multiple times, and Raji will hop, cartwheel, and fling herself to maximise distance, allowing her to evade enemy attacks and reach further with her own attacks at the same time.

Though she’s agile and powerful, Raji is quite dependent on the landscape around her. Without walls to scale and poles to swing around, she’s not as capable in attack. And she has little in the defence department to begin with, at least in the first few hours, which means that it’s all the more important to prioritise dodging — or blocking, once that’s available — enemy fire.

Much more so during boss fights, which require you to strategise a lot more: identify your opponent’s patterns, preserve your health at all costs, figure out the attack solution, and then execute it to perfection. Otherwise, you’ll be staring at death over and over. And you can’t run away from any fights. Every time you encounter enemies, Raji locks you inside an imaginary boundary which you can’t leave until you win.

Where the game falters is in the graphics department. For instance, all the stairs on Raji are made up of quite large polygons. Raji can’t put her foot on individual steps and instead feels like she’s gliding down them. More annoyingly, Raji’s face itself is one giant polygon and has no detail to it. Some environments are really saturated and/or dark. Even with the Switch on full brightness, I’d trouble seeing where I was going. Having it on TV didn’t make it any easier.

And despite the mediocre graphical fidelity, Raji isn’t always a smooth experience, with the game lagging in heavy environments. We also ran into bugs where we got stuck in a level, were forced to reload a saved slot, and doing so crashed the game. Some of this is down to the Switch’s capabilities, as we can attest from spending a couple of hours with the demo on Xbox One. 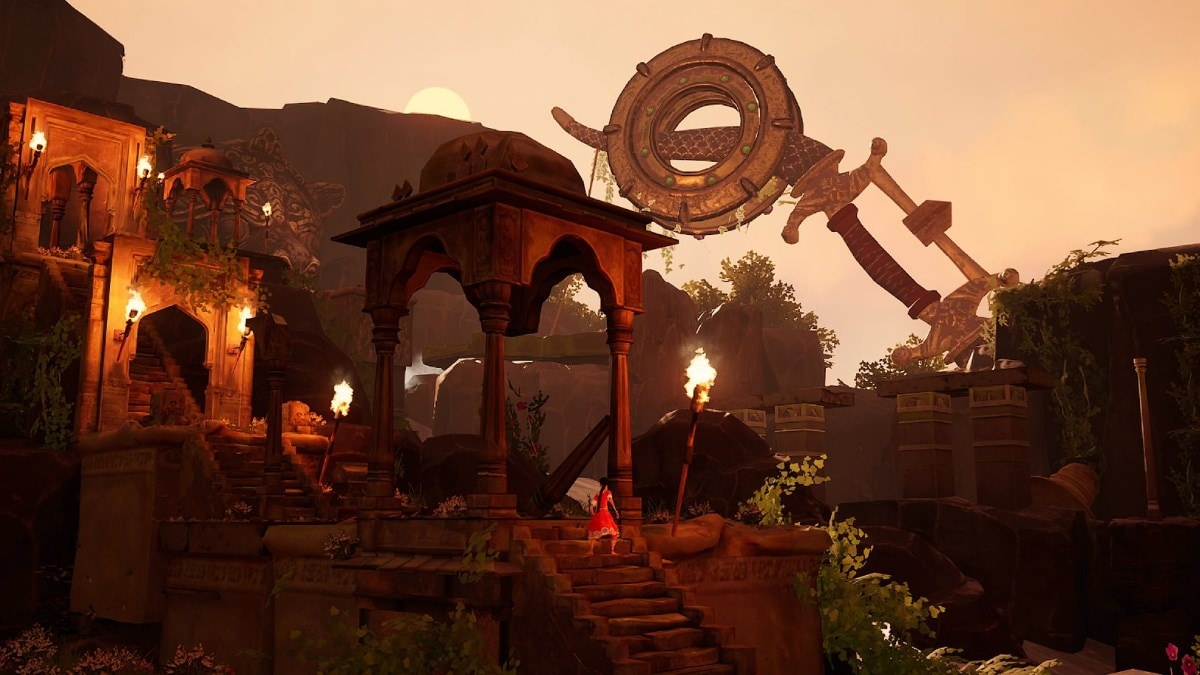 An object out of Indian mythos in Raji: An Ancient Epic
Photo Credit: Nodding Heads Games

These are all signs of the aforementioned lack of polish in Raji, which is also evident in select bits of voice acting. But for a debut effort — Nodding Heads Games has worked with an international team, but it’s their brainchild and them at the forefront — it’s proof that Indian studios with the right push can deliver titles for major consoles, and not be stuck in the free-to-play mobile mess that dominates Indian game development.

It’s also proof of what India can contribute to the games industry from its vast culture — with the right eye. While both Durga and Vishnu watch over Raji across her journey, the latter is sceptical and wonders if she’s capable while the former steadfastly believes in her. The very goddess who was created by a coalition of defeated gods as a last resort against an all-powerful demon.

In a heavily patriarchal society where religion is often twisted to serve misogyny, kudos to the developers for making a teenage girl the playable character, who prays to said goddess and is empowered by her. Raji is not only a dutiful Durga devotee but also a believer of her own abilities, as she jumps around in an Indian dress and banters with demons while slaughtering them. The game that takes her name is a true feminist fable.