Popular smartphone maker Realme has worked hard to build up a capable range of audio products at competitive prices. While the range covers wired, neckband-style wireless, and true wireless earphones, the company has sensibly put a strong focus on the true wireless segment, and launched good products with useful features such as active noise cancellation and app support. Realme’s newest launch in the space is the Buds Air 2, a pair of true wireless earphones that promises a superior feature set at a very affordable price.

Better fit and ANC on the Realme Buds Air 2

There are some design changes between the Realme Buds Air 2 and its predecessor from 2019, the most significant of which is a switch to a proper in-canal fit. This also allows for suitable sound isolation to aid active noise cancellation, and also makes for a secure fit. The stalks have a glossy finish, and the earpieces look decent enough for the price. This headset is available in two colours – white and black – with both looking equally tasteful and sensible, in my opinion.

The upper part of the stalk on each earpiece is touch-sensitive, and can be used to control some of the functions of the Realme Buds Air 2 including playback, invoking the voice assistant, and active noise cancellation. These controls are customisable through the Realme Link app, and you can even set different ones for the left and right earpieces.

What I didn’t like was the responsiveness of the touch sensors. The lack of a specifically defined touch-sensitive area, and the fact that the stalks are curved, meant that it often took multiple attempts to get the earphones to respond to touch commands. The headset was also a bit too slow to respond than I would have liked, even when the tap gestures did register. 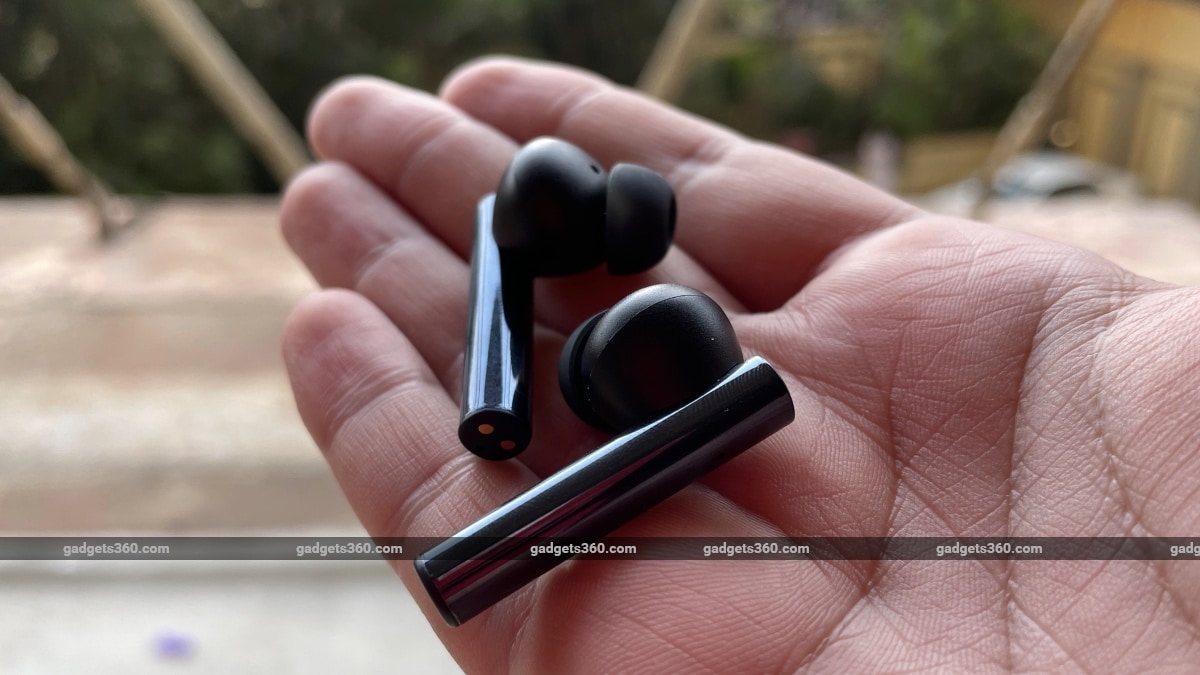 The pebble-shaped charging case of the Realme Buds Air 2 matches the colour of the earpieces. It has a discreet pairing button on the side and a USB Type-C port at the bottom with support for fast charging. The case is compact, and looks and feels as good as you can expect for the price of this headset. Included in the sales package are a short charging cable and a total of three pairs of silicone ear tips for a customised fit.

Realme Link, the company’s app for its various IoT devices and accessories, is available on both iOS and Android. However, the audio product range isn’t supported on the iOS app, so you can only control headsets such as the Realme Buds Air 2 if you use the Android app. When these earphones are paired to an Android device, the app automatically detects them and shows specific settings and controls. There’s also Google Fast Pair, which ties the headset to your Google account the first time you’re setting it up with an Android device.

The app displays specific battery levels for the two earpieces and the charging case. It lets you cycle between noise control modes, activate game mode for low-latency audio transmission, and choose between sound modes to customise the sonic signature. You can also change the touch controls, turn on or off in-ear detection, and update the firmware. Not too many affordable true wireless headsets offer an app experience at all, let alone one this good.

In terms of specifications and features, the Realme Buds Air 2 is excellent on paper. The earphones have 10mm dynamic drivers, Bluetooth 5.2 for connectivity with support for the SBC and AAC Bluetooth codecs, and a claimed response delay of 88ms in low-latency mode. With active noise cancellation, the claimed noise reduction is up to 25dB, and the earpieces are IPX5 rated for water resistance.

There is fast charging on both the charging case and earpieces of the Realme Buds Air 2, with up to 120 minutes of playback after 10 minutes of charging as stated by Realme. In my testing, the earpieces ran for around three hours and 30 minutes, at moderate to high volumes with ANC on. The charging case added another four full charges to the earpieces for around 17-18 hours of listening per charge cycle, and the case and earpieces were able to fully charge from empty in under two hours.

One key feature largely defines the Realme Buds Air 2 – active noise cancellation. Among the most affordable true wireless headsets to come with this premium feature, this is naturally what many potential buyers will be considering it for. The active noise cancellation on this pair of earphones is good for the price, but I’ll get into the details on this a bit later. 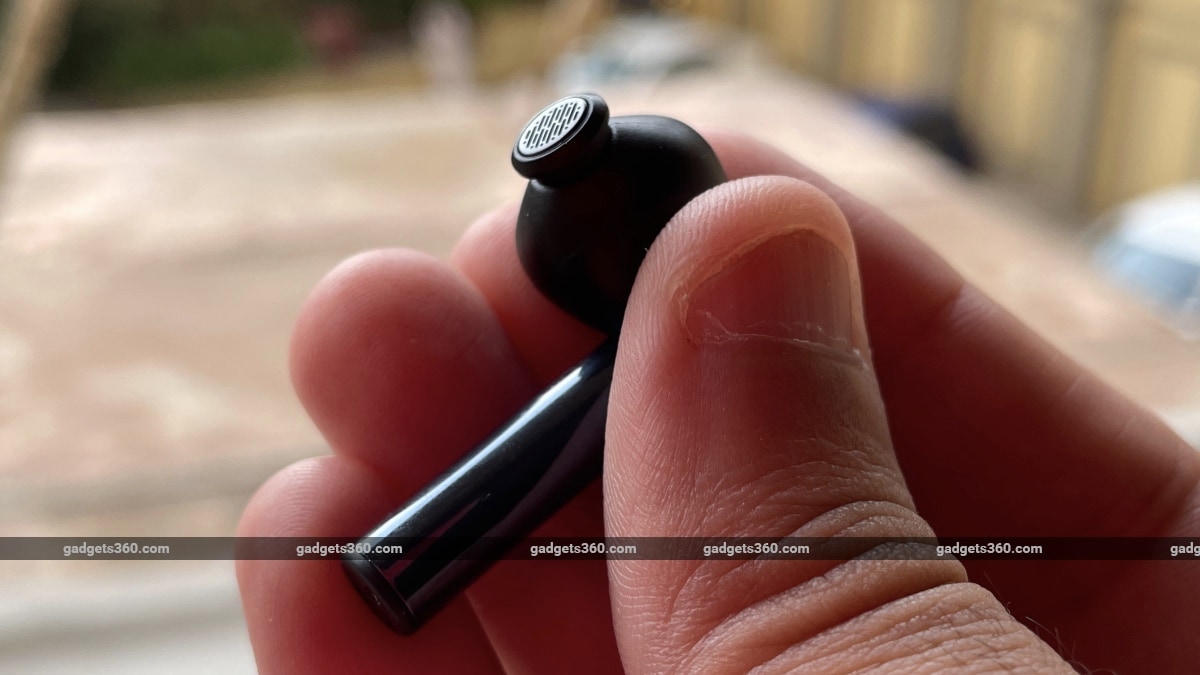 The Realme Buds Air 2 is powered by 10mm dynamic drivers

When it comes to sound quality, the Realme Buds Air 2 is roughly what you’d expect from a pair of true wireless earphones at this price, but definitely not among the best in the segment. The sonic signature is biased towards the lows, but not extremely so. While the sound is clean at moderate volumes, there’s not a lot of detail, and high volumes did tend to make it a bit shrill at the top.

Starting with Answers by Astropilot, things started off smoothly at the start of this mellow and soothing track, but there was always a hint of the highs being a bit too sharp. With the beat kicking off, the strong lows came to the fore, and the shrill highs became even more pronounced. These two frequency extremes also tended to overpower the mid-range significantly, with the drivers sometimes struggling to keep up with the pace of the track.

Switching to the faster and more lively My Mind’s Made Up by Kraak and Smaak, the bass dominated this track, often punching a bit too hard. The pace of the track also further highlighted the limited levels of detail and precision of the Realme Buds Air 2. While sounding a fair bit better than the Boat Airdopes 441, there was still a considerable gap in the sound as compared to the OnePlus Buds Z, our current top pick at around Rs. 3,000.

The aggression in the bass, shrillness in the highs, generally narrow soundstage, and simple sound only really made a difference when the volume level was over 75 percent. Lower than that, these issues were less pronounced and noticeable, but this also made for a generally dull sound. While I didn’t dislike the sonic signature of the Realme Buds Air 2, I did feel that it was lacking. Realme does try to make up for this with active noise cancellation, and indeed if that’s what you need, you’re getting decent ANC performance for the price.

Like on the Realme Buds Air Pro, active noise cancellation on the Realme Buds Air 2 is basic, but competent and functional. You do get a reasonable reduction of low droning sounds such as air conditioners and the general hum of the urban outdoors. However, the earphones didn’t offer a significant reduction of sounds such as ceiling fans and vacuum cleaning robots. It did help to make music a bit easier to listen to, but the quality of the ANC is far from that of mid-range options such as the Oppo Enco X and Huawei Freebuds 3i.

Transparency mode was reasonably good, but did sound a bit sharp and not as natural as on the Realme Buds Air Pro. Connection and call quality on the Realme Buds Air 2 are decent; voices were clear on both ends of calls, and even distances of around 10-12 feet from my paired smartphone didn’t affect connection stability and sound quality. The low-latency mode did offer a reasonable level of latency reduction while maintaining connection stability, but this affected both battery life and sound quality negatively. 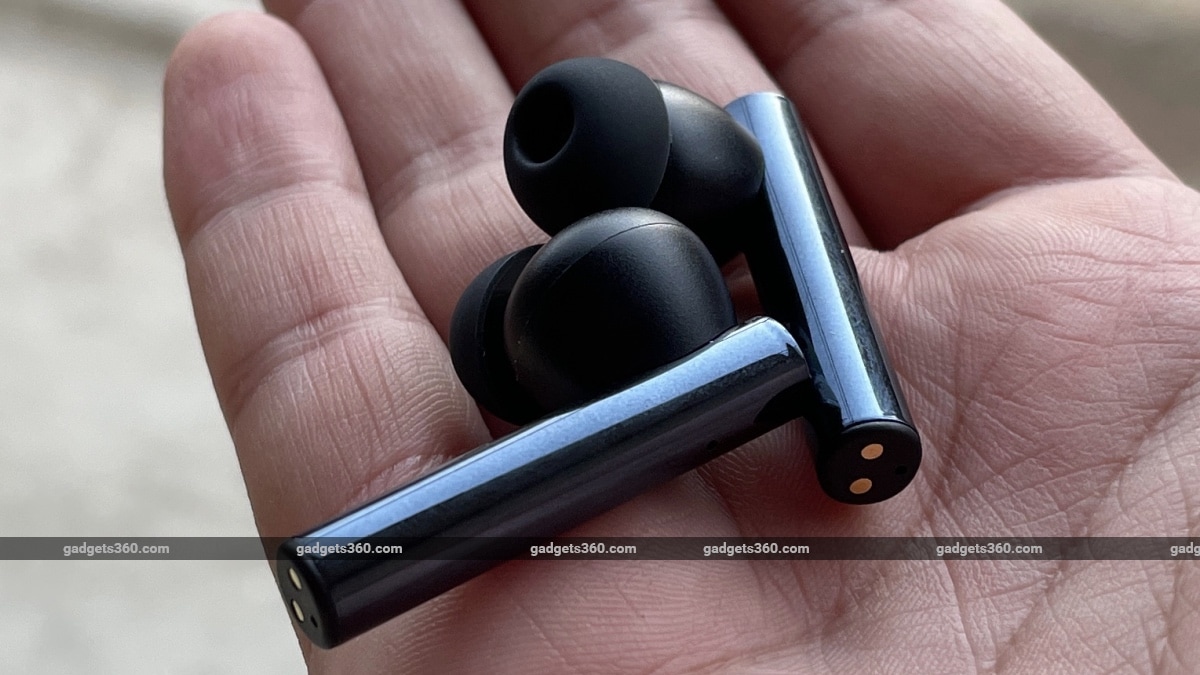 The Realme Buds Air 2 true wireless earphones are special for one big reason: decent, functional active noise cancellation at a relatively low price. Apart from this, there’s also good design, connectivity, and performance on voice calls, but my praise for these earphones stops short when it comes to sound quality. The Buds Air 2 doesn’t sound bad by any means, but it’s best described as ordinary. Although the bass-heavy signature might suit some listeners, the lack of detail and character hold these earphones back.

Buy the Realme Buds Air 2 only if you have a budget of under Rs. 3,500 and absolutely must have active noise cancellation. If you can do without that, the OnePlus Buds Z is a better-sounding pair of earphones at a lower price, and will offer a more satisfying overall experience. You might also want to look at options such as the Lypertek Levi or Oppo Enco W51 if you can raise your budget to around Rs. 5,000.