Samsung is among the very few manufacturers still pushing out high-end Android tablets, and the Galaxy Tab S7+ is its latest model. While most other manufacturers have been sticking to low-end tablets, Samsung has been showcasing what a top-tier Android tablet should be like. The Galaxy Tab S7+ has some impressive specifications such as a big 12.4-inch Super AMOLED display with a 120Hz refresh rate, a Qualcomm Snapdragon 865+ processor, and a bundled S-Pen stylus. Samsung has set the price at Rs. 79,999 which begs the question, is the Galaxy Tab S7+ worth such a huge investment? I put it through our tests to find out.

There are four AKG tuned speakers on the Tab S7+; two positioned at the top and the other two at the bottom, on either side of the USB Type-C port. The frame of the tablet is made out of metal and has a premium feel to it. On the right side, you have the power and volume buttons, along with a tray for a Nano-SIM. You will see a three-pin connector sitting flush on the left of the device, with two notches for compatible accessories. Samsung did send me a Book Cover Keyboard case, which fit this tablet perfectly. More on the keyboard case in a bit. 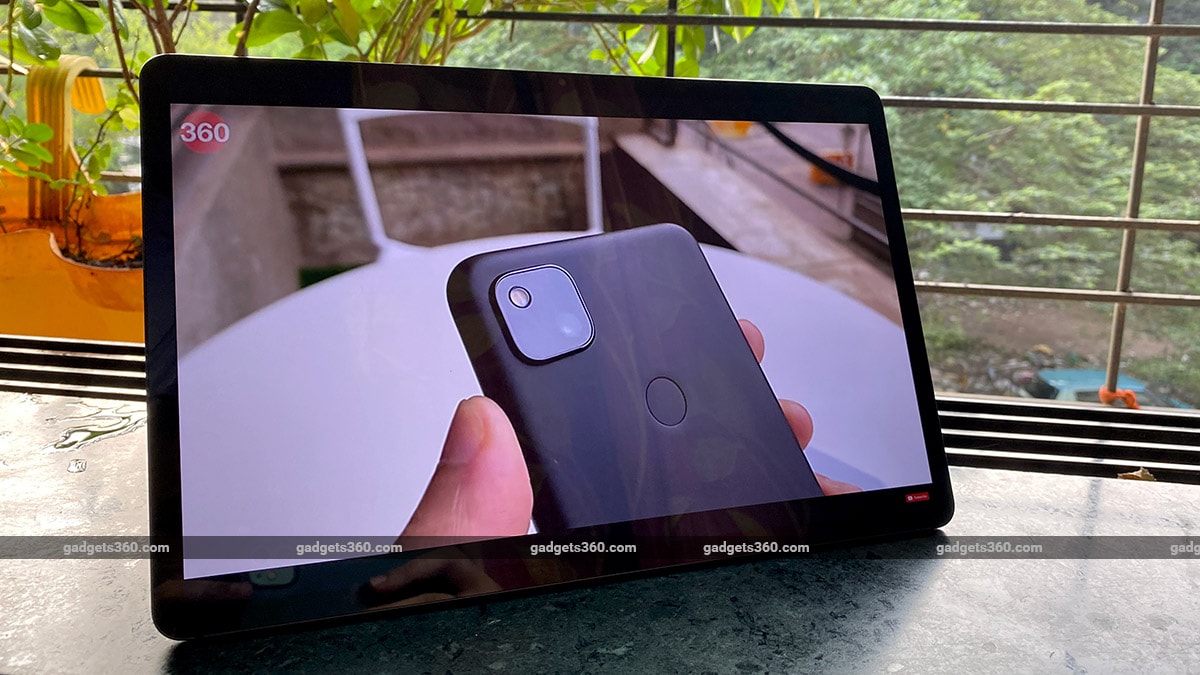 You’ll find antenna lines running across the top and bottom of the frame which help the Galaxy Tab S7+ latch onto LTE. The back of the tablet is flat with only a dual camera module in the top left corner. A glossy patch extending below the cameras tells you where you can stow the S-Pen. It stays in place using magnets, and is automatically charged while it is attached. The Galaxy Tab S7+ weighs 575g and single-handed usage would be challenging. Samsung has packed in a 10,090mAh battery, and supplies a 15W charger in the box.

Samsung has pretty much cherry-picked the best hardware for the Galaxy Tab S7+. Let’s start with the AMOLED display, which supports HDR10+ and a 120Hz refresh rate. The display is crisp and has excellent viewing angles. You can also change the colour profile and colour temperature of the panel. I found that the display of the Galaxy Tab S7+ gets bright enough and can be used even when outdoors, though it is quite reflective.

Powering the Galaxy Tab S7+ is the Qualcomm Snapdragon 865+ SoC which is pretty much the most powerful processor for the Android Platform at the moment. It’s paired with 6GB of LPDDR5 RAM and 128GB of internal storage. You do get a microSD card slot, which lets you expand storage by up to 1TB. There is support for Bluetooth 5, dual-band Wi-Fi, 4G VoLTE, and four navigation systems.

The Galaxy Tab S7+ has an in-display fingerprint scanner, which is towards the bottom of the display. It is a CMOS sensor, and you can see the display light up when you place your finger on it. Just like the Galaxy Tab S6 (Review), the Tab S7+ does not have a 3.5mm headphone jack, so you won’t be able to plug in your older headphones. 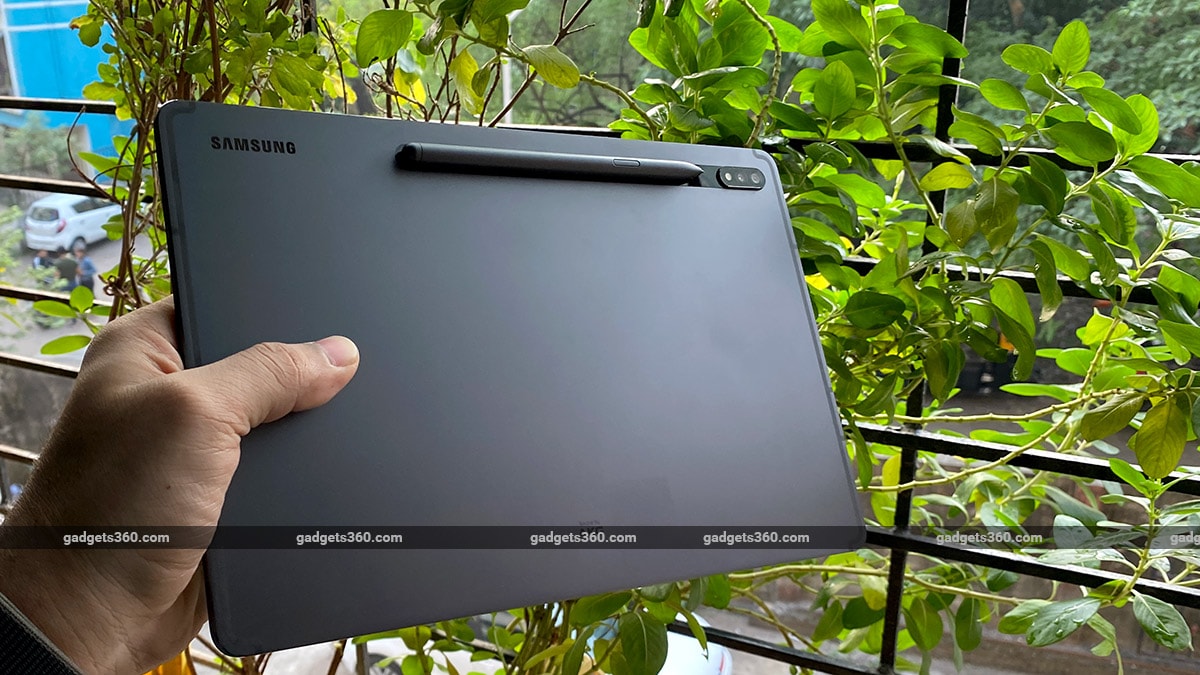 Samsung Galaxy Tab S7+ has a bundled S-Pen that latches on to the back.

In terms of software, you get OneUI 2.5 on top of Android 10, and my review unit was running the September Android security patch. The UI has been scaled up for the tablet-sized display, and navigating around it was very easy. If you have used a Samsung smartphone recently, you will find yourself at home on the Galaxy Tab S7+. You can multitask quite easily with two apps running side by side. If you wish to work on more than two apps at a time you can open additional ones in pop-up windows. I could open about ten apps this way, but only five can be used actively. Just like on Galaxy smartphones, there is a multi-app tray on the right side corner. This is easily customisable.

You can also press and hold the button on the S-Pen to launch the camera app on the tablet and then use it to capture photos. A double-click switches between cameras, and a swipe with the button pressed changes camera modes. Samsung has optimised the tablet to work with the S-Pen and it offers good palm rejection. I could rest my palm completely on the tablet while using sketching apps without any accidental touches.

Samsung sent me the Keyboard Cover with the Galaxy Tab S7+ and I used it extensively during the review period. The keyboard cover comes in two pieces; the keyboard snaps onto to the left of the Galaxy Tab S7+ while the kickstand which attaches to the back. The keyboard cover has been improved significantly compared to the one I tested along with the Galaxy Tab S6. Samsung has used stronger magnets on the back which latch on to the tablet securely. When pulling the kickstand open, these magnets don’t budge making it very easy to use without fear of the back cover coming off. There are also magnets at the bottom to latch on to the tablet when the case is closed. 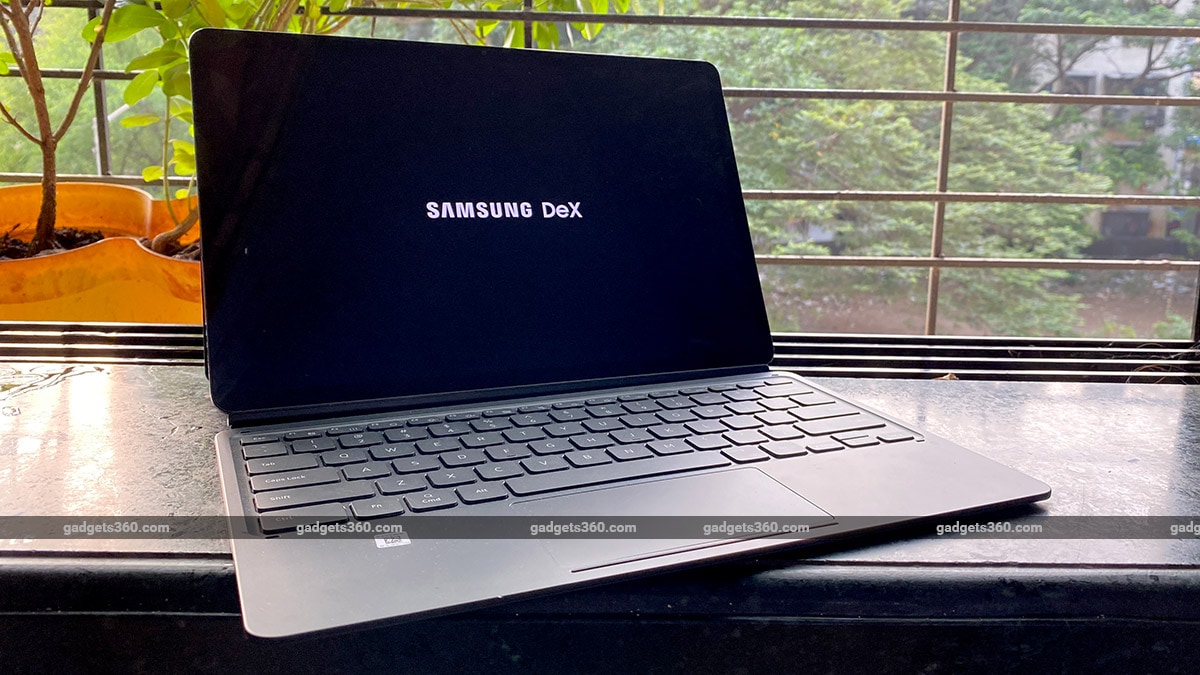 Snapping on the Keyboard Cover enables Samsung Dex automatically. This lets you run apps to be run in windowed mode. The entire interface looks similar to Windows, and I could multitask without any issues. This keyboard has function keys as well as multimedia shortcuts, but the keys aren’t backlit.

I found the trackpad to be precise and easy to use but it is smaller than the trackpad on most laptops. The keys have shallow travel but a reassuring click ensured that I never had to double-check a keystroke, and typing was a breeze. While the keyboard cover gives this tablet a laptop-like appearance, you can only comfortably use it on a table since the base cannot support the tablet on your lap. Samsung has priced the Galaxy Tab S7+ keyboard case at Rs. 15,999, so you will have to shell out extra for it.

I enjoyed watching videos on the big 12.4-inch display. Samsung is known for its punchy AMOLED displays and this is one of the biggest you can get . The Galaxy Tab S7+ has good viewing angles and the high refresh rate makes scrolling look super smooth. Streaming videos were engaging, and the four AKG-tuned speakers were capable of filling a small room with audio.

At the back, the Galaxy Tab S7+ has a 13-megapixel primary camera along with a 5-megapixel depth sensor. It has an 8-megapixel selfie camera on the front. These specifications seem similar to those of the Galaxy Tab S6. With a tablet this big, taking photos isn’t easy or convenient. You can use these cameras occasionally but be prepared for average quality shots. The selfie camera is the one that will be used most frequently. I used it for video calling and found it to be good for that purpose. 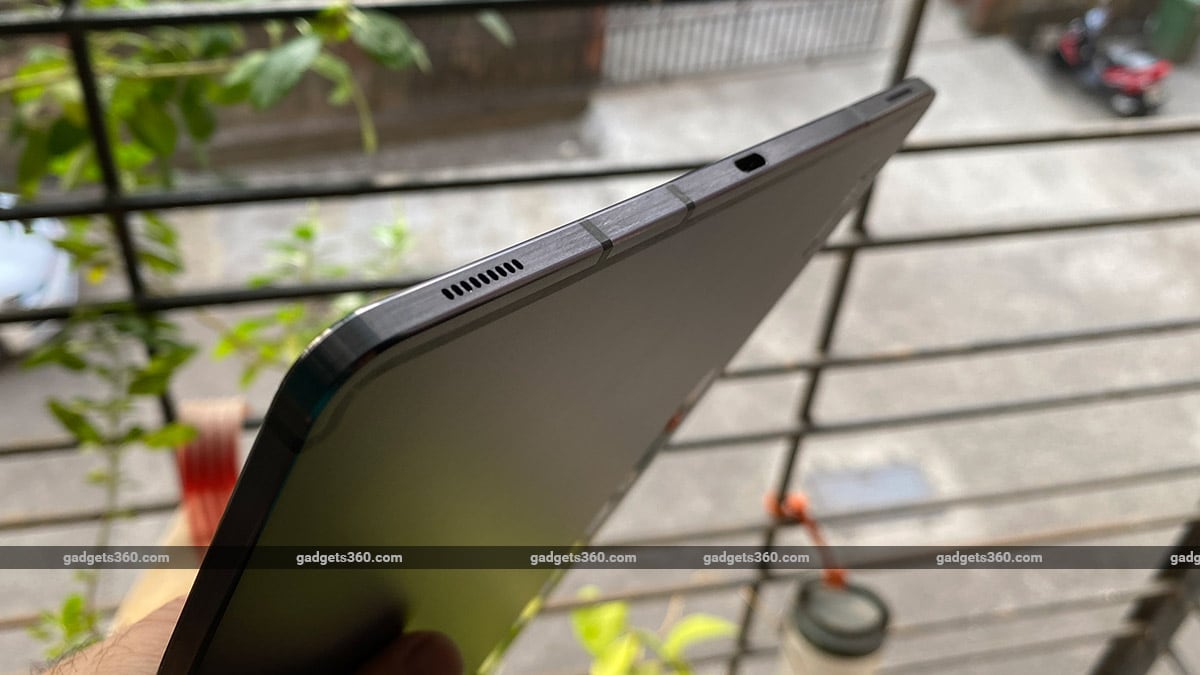 While the Samsung Galaxy Tab S7+ is powerful enough to run most games out there, its size is not always convenient. Casual games that have fewer controls were easier to manage on this big tablet. Among Us and Asphalt 9 ran without any issues. The battery did not drain significantly, and the tablet didn’t get too warm to the touch either.

As for battery life, the Galaxy Tab S7+ managed 9 hours and 46 minutes in our HD video loop test, which is lower than its predecessor’s score. This could be because of the bigger display and the faster processor. Since a tablet is not used as constantly as a smartphone, you should get good battery life out of the Galaxy Tab S7+. I only needed to charge it once every 4-5 days. Samsung ships a 15W charger in the box which is a little surprising considering that even some of its budget phones ship with more powerful ones. This charger is relatively slow . It charged the tablet to 17 percent in 30 minutes and 32 percent in an hour. Charging the mammoth 10,090mAh battery took around 3 hours.

If you are looking for a flagship-grade Android tablet your options are quite limited. Samsung is one of the very few manufacturers still pushing out premium tablets, and the Galaxy Tab S7+ is pretty much the best that this company has to offer. The big Super AMOLED display and the quad-speaker arrangement make it an excellent device to consume content on. While the size of the Galaxy Tab S7+ could make it difficult to game on, it packs the hardware to run anything you throw at it.

However, if you are open to switching operating systems\, you could take a look at the new iPad Air. This iPad is powered by the new Apple A14 Bionic SoC and you will be able to get an LTE variant of the iPad Air for roughly the same price as the Galaxy Tab S7+.