Samsung either has to be one of the biggest risk takers in the world or just plain confident about its foldable display tech, to have launched its third foldable smartphone in less than two years. The first Galaxy Fold, launched in February 2019, was marred by several issues, most notably the fragility of its display. Foldable phones in general have continued to be regarded with scepticism for the same reason, and so it was imperative for Samsung to design a successor that irons out the creases, so to speak. We got to try out the brand new Samsung Galaxy Z Fold 2 for a day and here are my thoughts about it.

My first impressions of the Galaxy Z Fold 2 began emerging right when I started unboxing it. The phone rests in the box in this protective sticker which has all sorts of warnings, just so you don’t go poking at it with keys or fingernails, or even take it out in dusty surroundings. All of this gave me my first idea of how fragile the phone may be, even though Samsung says it has taken measures to make it more robust.

To address the #foldgate controversy, Samsung has reinforced this new model with ultra-thin glass. Apart from the protective plastic packaging with the warnings, there is another really thin screen protector on the inside screen, and it seems as though it doesn’t want to come off as readily as it did on the first Fold. Although the screen protector looks glossy, it has a matte feel to it and isn’t as smooth as you’d expect.

Moving on to the other things Samsung has addressed, you have a redesigned hinge mechanism which tucks the display in further than before to protect it even more from dust and other particles. The mechanism seems to offer a bit more resistance, because Samsung wants you to use the smartphone half folded as well, which we will get to in a moment. The overall feeling of snapping the phone shut is solid, although my heart did skip a beat or two when I felt that I might have shut it a bit too hard. 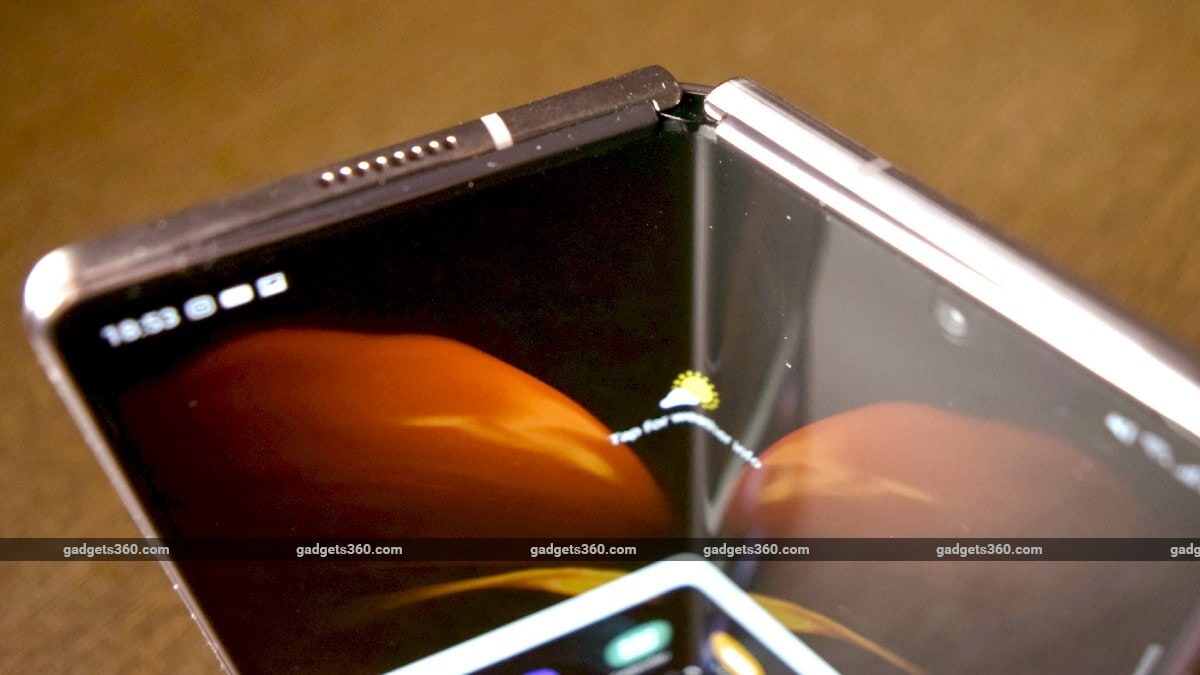 The Samsung Galaxy Z Fold 2 offers a redesigned hinge mechanism which tucks the display in further than before.

Let’s come to the two displays now. These have also been redesigned, and for the better. Let’s start with the secondary display on the outside. It is an AMOLED panel which now spans 6.23 inches diagonally and has been pushed all the way to the corners. It has a resolution of 2260 x 816. You can spend much more time using this than the small external panel on the original Galaxy Fold. Its weird 25:9 aspect ratio makes it suitable for scrolling through stuff one-handed, and although it can do everything a regular smartphone screen can, it is just awkward because of how tall it is.

On the inside you have this beautiful 7.6-inch foldable AMOLED display with a resolution of 1768 x 2208 and refresh rate of 120Hz. In typical Samsung fashion you have vivid, saturated colours, and the high refresh rate makes it really smooth. Yes, you can still see the crease in the middle of the folding screen at certain angles, and there is also some colour shifting, but it’s still a really nice display.

This time around Samsung has actually reduced the number of cameras, which isn’t necessarily a bad thing, especially because this means there’s no hideous notch on the inside. Samsung has placed the inner and external selfie cameras into cutouts, which is definitely an elegant solution. Both the outside and the inside displays get 10-megapixel selfie cameras. At the back, you have three 12MP sensors with wide, telephoto, and ultra-wide lenses. 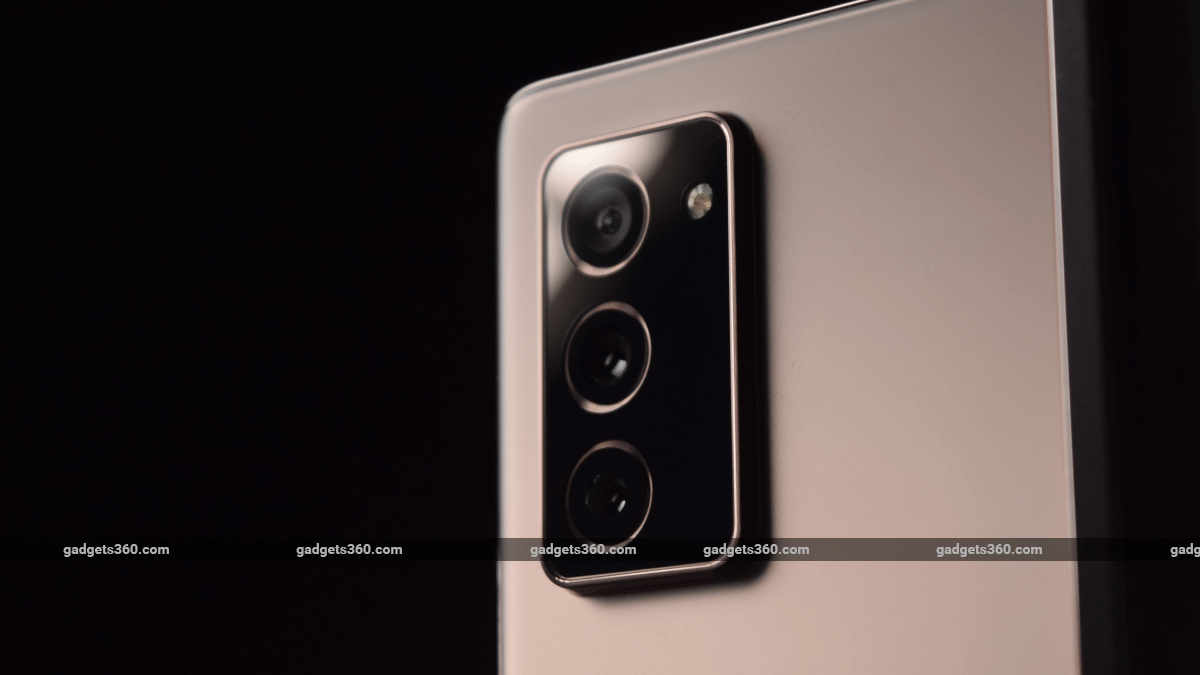 At the back, the Samsung Galaxy Z Fold 2 has three 12MP sensors with wide, telephoto, and ultra-wide lenses

Under the hood, you get flagship quality specs, including the Qualcomm Snapdragon 865+ processor. My review device has 256GB of storage and 12GB of RAM. I can’t say much about everyday real-world performance yet, because of the limited amount of time I have had with this device, but it seems snappy enough.

Using the Galaxy Z Fold 2 is an interesting experience, and it does take a bit of time to get used to. Given the weird aspect ratio of the display, you’ll actually have to figure out which apps are better suited to the giant foldable screen and which you should use with the taller secondary display.

For a quick random scroll through your Instagram feed, for example, it would make sense to use the secondary display, especially because the app hasn’t yet been optimised for the square aspect ratio of the foldable display. The same applies for apps that don’t require you to have an immersive experience, like making a to-do list or setting a reminder.

Of course, you would still want to watch movies and videos on the foldable display inside, mainly because it’s huge and just better looking.

Gaming should definitely be done on the big screen because you can easily map your controls on the bottom half and also because of the higher refresh rate. It’s just convenient on a whole different level.

Samsung has optimised a few apps, most notably the camera app, to distribute controls across the bottom when you fold the device halfway. It’s kind of a neat trick, and this is something we saw on the Galaxy Z Flip as well.

Another thing that you’ll definitely need to experience is how you multitask from one screen to the other. When you shut the Galaxy Z Fold 2, it thinks you mean you’re done with it, and going in your pocket now. But often… that’s not the case.

You’ll see that an app will seamlessly transition from your cover display to the foldable one when you open the phone, but the reverse doesn’t hold true. If you want to view an app on the outer screen and snap the phone shut, it just locks. Often, when I unlocked the phone, it asked me to restart the app.

To sum it all up, it’s been over a year since the first Samsung Galaxy Fold was launched, and now its successor is slicker and better designed. However, it is still not practical for everyday use. And at Rs. 1,49,999, it’s definitely not affordable by any means. You can definitely buy this device to show it off, but you’ll still have to be very careful with it and it will be awkward a lot of the time. It does have tonnes of interesting features and potential to be discovered, but my initial reaction after spending one day with it is that Samsung can still refine it further.