The Umbrella Academy’s debut season, released last February on Netflix, was a mess. The creator Steve Blackman and Co. took an outlandish, vibrant comic — from the erstwhile My Chemical Romance frontman Gerard Way and Brazilian illustrator Gabriel Bá — and turned it into a dour, gloomy series that looked as generic as they come. Moreover, all but one of its lead superhero characters were stuck in passive, uninteresting storylines for most of the runtime, making season 1 a slog to get through. That was despite the fact they had an apocalypse to prevent — a super-cliché for the superhero genre — in just a week’s time. The Umbrella Academy’s second season, out July 31, has learnt some lessons for the better but it also continues to be similar in many ways that hold it back.

In a repeat of season 1, the Hargreeves foster siblings have to deal with another apocalypse in The Umbrella Academy season 2. On one level, the Netflix series seems to be trying and making a joke out of the doomsday business, in terms of its prevalence in comic book fare and as if to say, “Oh look, the Hargreeves keep ending the world”, in stark contrast to what superheroes are supposed to do: save the day. The Umbrella Academy season 2 — we had access to all 10 episodes — is more fun when it treats that lightly, but it doesn’t hit that beat enough and drifts into serious territory, where it doesn’t have a handle on things. Its sincere approach works much better when it’s exploring societal ills, thanks to a new setting that essentially hits the soft reboot button on The Umbrella Academy.

Unfortunately, none of that can help get rid of The Umbrella Academy’s other major problem: it thinks it’s a “cool” show but it’s not. That doesn’t stop season 2 from trying, over and over. The biggest manner in which this manifests is in its push for being whimsical, from the zany characters (who are insufferable after a point) to the curious happenings (which have little emotional impact). What it actually needs are characters with depth, interesting conversations, and a meaningful journey. Instead what it serves up are scenes after scenes set to a peppy soundtrack. It only goes to show how dependent The Umbrella Academy season 2 is on music to propel its story, and the power of nostalgia and the existing art can’t make up for the fact that there isn’t any real meaning to it. And yes, there’s an obligatory dance sequence too, since that was a highlight of the first season.

From Shakuntala Devi to The Umbrella Academy, What to Watch This Week 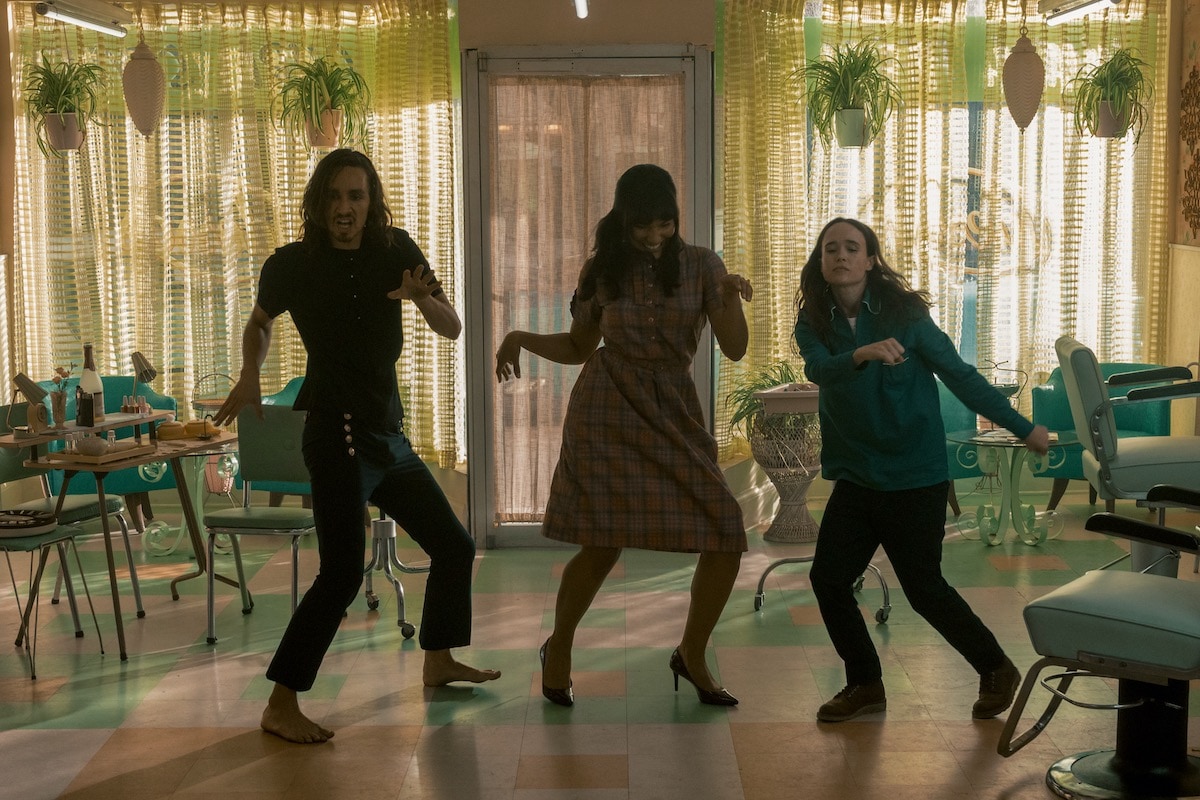 The Umbrella Academy season 2 opens right where we left off, as Five (Aidan Gallagher) transports his family back through time to escape the destruction of Earth. But Five’s plan to put themselves into their childhood bodies goes wrong — after all, Five has never been great with time travel — and they end up just as they are, six decades into the past: the 1960s. To make matters worse, they have been separated from each other. Though each of the six Hargreeves arrive in the same alley in Dallas, Texas USA, they are scattered across a three-year period. All of them think they are the only ones to survive. Five lands furthest in time in late 1963, discovers that another apocalypse is just days away, and then sets out to find his family with a bit of help.

Wannabe-Batman Diego (David Castañeda) has been committed to a mental institution for claiming that then-US President John F. Kennedy is going to be assassinated by Lee Harvey Oswald. He’s also made a new equally snarky friend at the sanitarium — Lila (Ritu Arya, from Feel Good). Klaus (Robert Sheehan) has been sober for three years while he started a cult that he’s now disillusioned with. As always, he has the dead Ben (Justin H. Min) for company, who’s getting sicker of him by the minute. Allison (Emmy Raver-Lampman) has become a civil rights activist and found a husband, Ray (Yusuf Gatewood, from The Originals). Her former love interest Luther (Tom Hopper) is working for nightclub owner Jack Ruby, the man who shot Lee Harvey Oswald.

That leaves Vanya (Ellen Page), who’s living with a rural Dallas family that took her in after she (conveniently) lost her memories during the time travel. It’s never explained but what it does is offer Page a clean slate to work with on The Umbrella Academy season 2. Unburdened by the weary constraints placed on her in season 1, Vanya develops into a richer character and is further helped by the fact that Page is the strongest performer of the lot.

The Umbrella Academy season 2 also does well in depicting the horrors of segregated America, with a couple of scenes a reminder of how little progress the US has made in leaving behind its racist past. But the same can’t be said of everyone else whose story is tied to JFK’s assassination, as it dissolves into another conspiracy plot. Haven’t we had enough of these already?

Additionally, there are bigger structural problems with The Umbrella Academy season 2. Its attempt at what feels like subversion — telling us in the opening minutes that another apocalypse is around the corner — actually works against the show, because it tries to slow things down after that, just as it did on season 1. Something so urgent ought to propel the show; but The Umbrella Academy season 2 settles down and spends the first few episodes catching up with everyone and bringing them back together (thanks to plot conveniences at times). It reads like a clear case of Netflix bloat. And it’s not like The Umbrella Academy wants to be a slow-paced, character-based drama, given its liberal use of montages and genre trappings.

Speaking of genre trappings, the action sequences on The Umbrella Academy season 2 are nothing special, save for one or two. But even then, they are heavily reliant on music to prop themselves up. The action choreography rarely catches your eye, with the editing falling into the generic cut-on-the-beat style that has become the norm. Comic book stories also need great villains and unfortunately, The Umbrella Academy season 2 collapses in that regard. It would be a spoiler to say who the primary villain is but they feel like they have been lifted from a Disney princess B-movie. And there’s a trio of boring Swedish assassins who don’t speak much and come across as incompetent, given they keep failing in their attempts to kill any of the Hargreeves.

The Umbrella Academy season 2 is better off when it’s focusing on the inter-personal dynamics between the six Hargreeves, whose relationship goes from constantly being at each other’s throats to finding common ground, learning to forgive, and being available for each other. Finally, they feel like a real family. It’s bolstered by its handling of race and LGBTQ issues. But as for the series on the whole, it’s doomed by the rapid tonal shifts from whimsy to sincere, at times within seconds. The imbalance undoes the good. At the same time, not taking its stakes too seriously does inject some joy into the proceedings, though its idea of fun doesn’t always pan out. The Umbrella Academy season 2 is very much a mixed bag, but it does seem to have a better idea of the show it wants to be this time around.

The Umbrella Academy season 2 is out July 31 on Netflix worldwide.

Is Redmi Note 9 the perfect successor to Redmi Note 8? We discussed this on Orbital, our weekly technology podcast, which you can subscribe to via Apple Podcasts, Google Podcasts, or RSS, download the episode, or just hit the play button below.